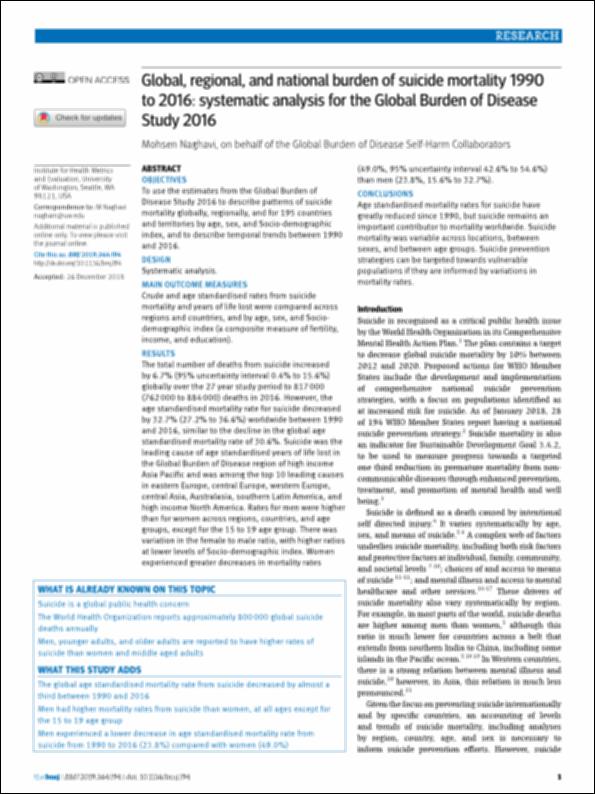 Objectives To use the estimates from the Global Burden of Disease Study 2016 to describe patterns of suicide mortality globally, regionally, and for 195 countries and territories by age, sex, and Socio-demographic index, and to describe temporal trends between 1990 and 2016. Design Systematic analysis. Main outcome measures Crude and age standardised rates from suicide mortality and years of life lost were compared across regions and countries, and by age, sex, and Socio-demographic index (a composite measure of fertility, income, and education). Results The total number of deaths from suicide increased by 6.7% (95% uncertainty interval 0.4% to 15.6%) globally over the 27 year study period to 817 000 (762 000 to 884 000) deaths in 2016. However, the age standardised mortality rate for suicide decreased by 32.7% (27.2% to 36.6%) worldwide between 1990 and 2016, similar to the decline in the global age standardised mortality rate of 30.6%. Suicide was the leading cause of age standardised years of life lost in the Global Burden of Disease region of high income Asia Pacific and was among the top 10 leading causes in eastern Europe, central Europe, western Europe, central Asia, Australasia, southern Latin America, and high income North America. Rates for men were higher than for women across regions, countries, and age groups, except for the 15 to 19 age group. There was variation in the female to male ratio, with higher ratios at lower levels of Socio-demographic index. Women experienced greater decreases in mortality rates (49.0%, 95% uncertainty interval 42.6% to 54.6%) than men (23.8%, 15.6% to 32.7%). Conclusions Age standardised mortality rates for suicide have greatly reduced since 1990, but suicide remains an important contributor to mortality worldwide. Suicide mortality was variable across locations, between sexes, and between age groups. Suicide prevention strategies can be targeted towards vulnerable populations if they are informed by variations in mortality rates.
Collections