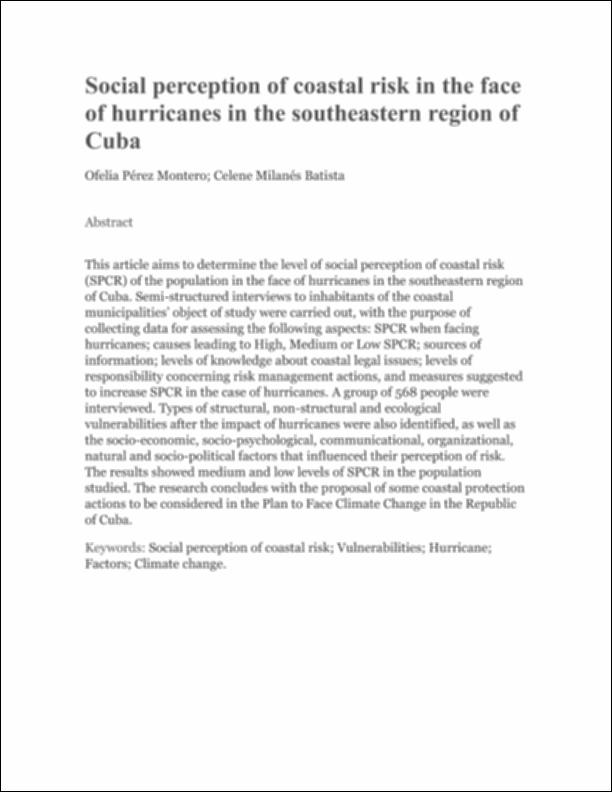 Social perception of coastal risk in the face of hurricanes in the southeastern region of Cuba.pdf (295.5Kb)
Author

This article aims to determine the level of social perception of coastal risk (SPCR) of the population in the face of hurricanes in the southeastern region of Cuba. Semi-structured interviews to inhabitants of the coastal municipalities’ object of study were carried out, with the purpose of collecting data for assessing the following aspects: SPCR when facing hurricanes; causes leading to High, Medium or Low SPCR; sources of information; levels of knowledge about coastal legal issues; levels of responsibility concerning risk management actions, and measures suggested to increase SPCR in the case of hurricanes. A group of 568 people were interviewed. Types of structural, non-structural and ecological vulnerabilities after the impact of hurricanes were also identified, as well as the socio-economic, socio-psychological, communicational, organizational, natural and socio-political factors that influenced their perception of risk. The results showed medium and low levels of SPCR in the population studied. The research concludes with the proposal of some coastal protection actions to be considered in the Plan to Face Climate Change in the Republic of Cuba.
Collections