Influence of knowledge management between the bank and the local socioeconomic development: correlational analysis 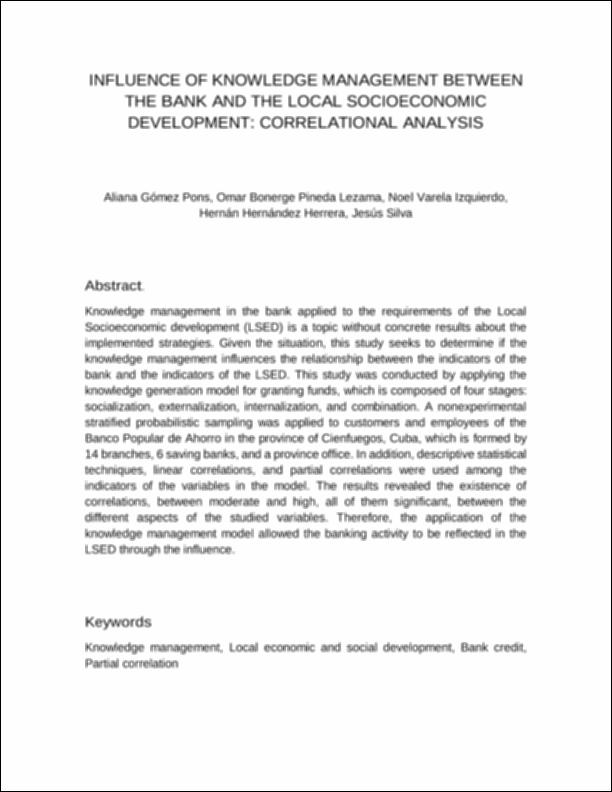 INFLUENCE OF KNOWLEDGE MANAGEMENT BETWEEN THE BANK AND THE LOCAL SOCIOECONOMIC DEVELOPMENT: CORRELATIONAL ANALYSIS (6.741Kb)
Author

Knowledge management in the bank applied to the requirements of the Local Socioeconomic development (LSED) is a topic without concrete results about the implemented strategies. Given the situation, this study seeks to determine if the knowledge management influences the relationship between the indicators of the bank and the indicators of the LSED. This study was conducted by applying the knowledge generation model for granting funds, which is composed of four stages: socialization, externalization, internalization, and combination. A nonexperimental stratified probabilistic sampling was applied to customers and employees of the Banco Popular de Ahorro in the province of Cienfuegos, Cuba, which is formed by 14 branches, 6 saving banks, and a province office. In addition, descriptive statistical techniques, linear correlations, and partial correlations were used among the indicators of the variables in the model. The results revealed the existence of correlations, between moderate and high, all of them significant, between the different aspects of the studied variables. Therefore, the application of the knowledge management model allowed the banking activity to be reflected in the LSED through the influence.
Collections

Except where otherwise noted, this item's license is described as info:eu-repo/semantics/closedAccess