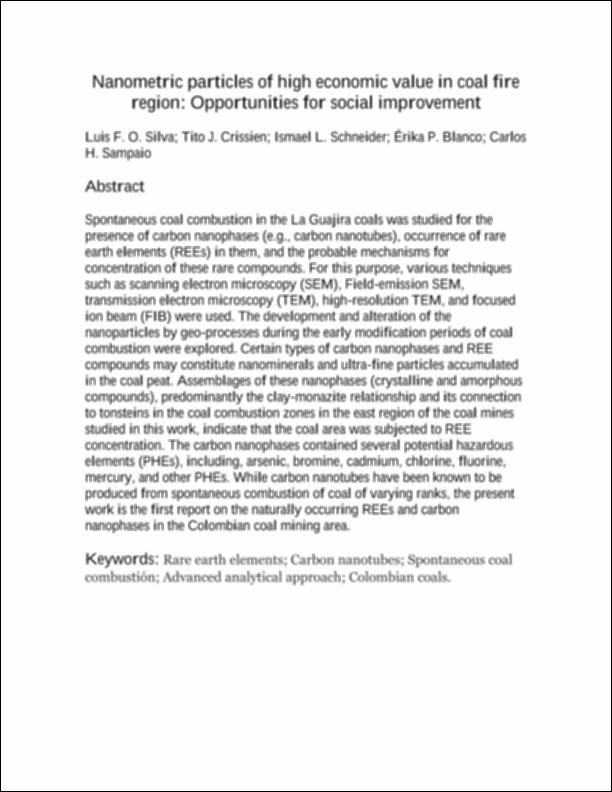 Spontaneous coal combustion in the La Guajira coals was studied for the presence of carbon nanophases (e.g., carbon nanotubes), occurrence of rare earth elements (REEs) in them, and the probable mechanisms for concentration of these rare compounds. For this purpose, various techniques such as scanning electron microscopy (SEM), Field-emission SEM, transmission electron microscopy (TEM), high-resolution TEM, and focused ion beam (FIB) were used. The development and alteration of the nanoparticles by geo-processes during the early modification periods of coal combustion were explored. Certain types of carbon nanophases and REE compounds may constitute nanominerals and ultra-fine particles accumulated in the coal peat. Assemblages of these nanophases (crystalline and amorphous compounds), predominantly the clay-monazite relationship and its connection to tonsteins in the coal combustion zones in the east region of the coal mines studied in this work, indicate that the coal area was subjected to REE concentration. The carbon nanophases contained several potential hazardous elements (PHEs), including, arsenic, bromine, cadmium, chlorine, fluorine, mercury, and other PHEs. While carbon nanotubes have been known to be produced from spontaneous combustion of coal of varying ranks, the present work is the first report on the naturally occurring REEs and carbon nanophases in the Colombian coal mining area.
Collections