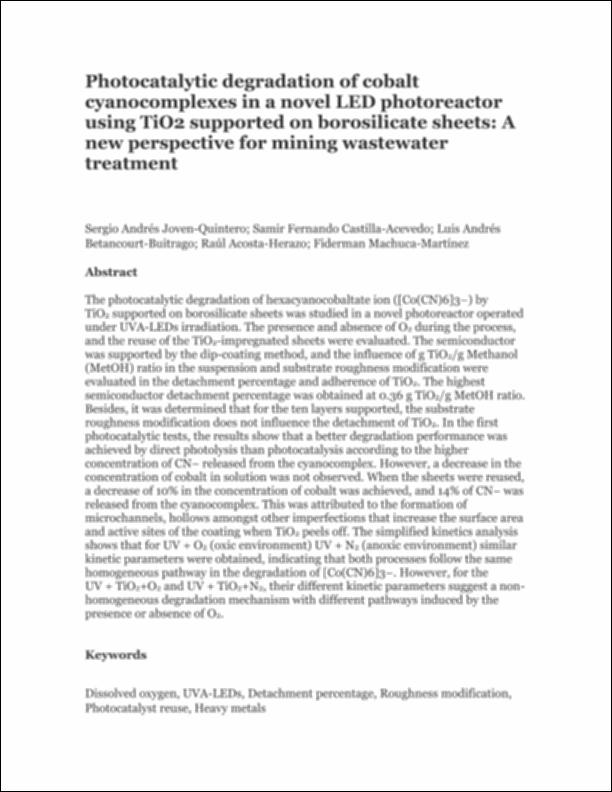 The photocatalytic degradation of hexacyanocobaltate ion ([Co(CN)6]3−) by TiO2 supported on borosilicate sheets was studied in a novel photoreactor operated under UVA-LEDs irradiation. The presence and absence of O2 during the process, and the reuse of the TiO2-impregnated sheets were evaluated. The semiconductor was supported by the dip-coating method, and the influence of g TiO2/g Methanol (MetOH) ratio in the suspension and substrate roughness modification were evaluated in the detachment percentage and adherence of TiO2. The highest semiconductor detachment percentage was obtained at 0.36 g TiO2/g MetOH ratio. Besides, it was determined that for the ten layers supported, the substrate roughness modification does not influence the detachment of TiO2. In the first photocatalytic tests, the results show that a better degradation performance was achieved by direct photolysis than photocatalysis according to the higher concentration of CN− released from the cyanocomplex. However, a decrease in the concentration of cobalt in solution was not observed. When the sheets were reused, a decrease of 10% in the concentration of cobalt was achieved, and 14% of CN− was released from the cyanocomplex. This was attributed to the formation of microchannels, hollows amongst other imperfections that increase the surface area and active sites of the coating when TiO2 peels off. The simplified kinetics analysis shows that for UV + O2 (oxic environment) UV + N2 (anoxic environment) similar kinetic parameters were obtained, indicating that both processes follow the same homogeneous pathway in the degradation of [Co(CN)6]3−. However, for the UV + TiO2+O2 and UV + TiO2+N2, their different kinetic parameters suggest a non-homogeneous degradation mechanism with different pathways induced by the presence or absence of O2.
Collections