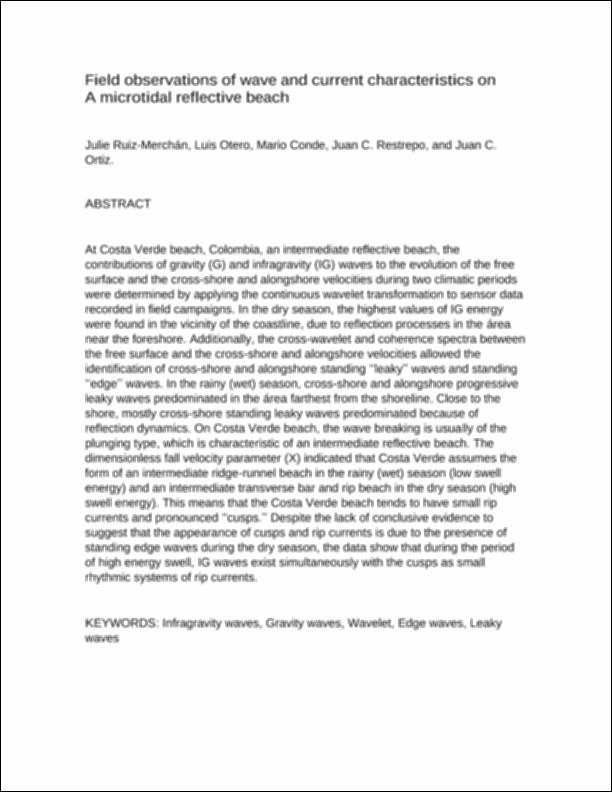 At Costa Verde beach, Colombia, an intermediate reflective beach, the contributions of gravity (G) and infragravity (IG) waves to the evolution of the free surface and the cross-shore and alongshore velocities during two climatic periods were determined by applying the continuous wavelet transformation to sensor data recorded in field campaigns. In the dry season, the highest values of IG energy were found in the vicinity of the coastline, due to reflection processes in the área near the foreshore. Additionally, the cross-wavelet and coherence spectra between the free surface and the cross-shore and alongshore velocities allowed the identification of cross-shore and alongshore standing ‘‘leaky’’ waves and standing ‘‘edge’’ waves. In the rainy (wet) season, cross-shore and alongshore progressive leaky waves predominated in the área farthest from the shoreline. Close to the shore, mostly cross-shore standing leaky waves predominated because of reflection dynamics. On Costa Verde beach, the wave breaking is usually of the plunging type, which is characteristic of an intermediate reflective beach. The dimensionless fall velocity parameter (X) indicated that Costa Verde assumes the form of an intermediate ridge-runnel beach in the rainy (wet) season (low swell energy) and an intermediate transverse bar and rip beach in the dry season (high swell energy). This means that the Costa Verde beach tends to have small rip currents and pronounced ‘‘cusps.’’ Despite the lack of conclusive evidence to suggest that the appearance of cusps and rip currents is due to the presence of standing edge waves during the dry season, the data show that during the period of high energy swell, IG waves exist simultaneously with the cusps as small rhythmic systems of rip currents.
Collections