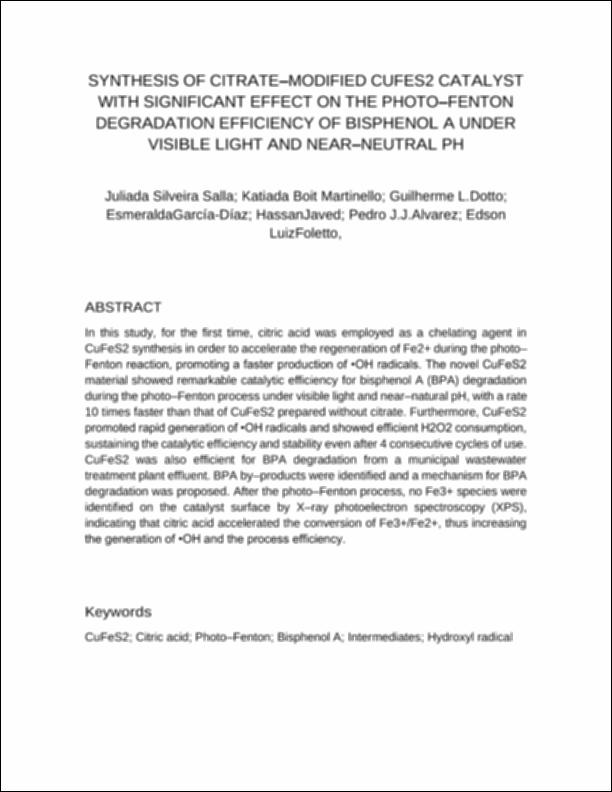 SYNTHESIS OF CITRATE–MODIFIED CUFES2 CATALYST WITH SIGNIFICANT EFFECT ON THE PHOTO–FENTON DEGRADATION EFFICIENCY OF BISPHENOL A UNDER VISIBLE LIGHT AND NEAR–NEUTRAL PH.pdf (83.71Kb)
Author

In this study, for the first time, citric acid was employed as a chelating agent in CuFeS2 synthesis in order to accelerate the regeneration of Fe2+ during the photo–Fenton reaction, promoting a faster production of •OH radicals. The novel CuFeS2 material showed remarkable catalytic efficiency for bisphenol A (BPA) degradation during the photo–Fenton process under visible light and near–natural pH, with a rate 10 times faster than that of CuFeS2 prepared without citrate. Furthermore, CuFeS2 promoted rapid generation of •OH radicals and showed efficient H2O2 consumption, sustaining the catalytic efficiency and stability even after 4 consecutive cycles of use. CuFeS2 was also efficient for BPA degradation from a municipal wastewater treatment plant effluent. BPA by–products were identified and a mechanism for BPA degradation was proposed. After the photo–Fenton process, no Fe3+ species were identified on the catalyst surface by X–ray photoelectron spectroscopy (XPS), indicating that citric acid accelerated the conversion of Fe3+/Fe2+, thus increasing the generation of •OH and the process efficiency.
Collections