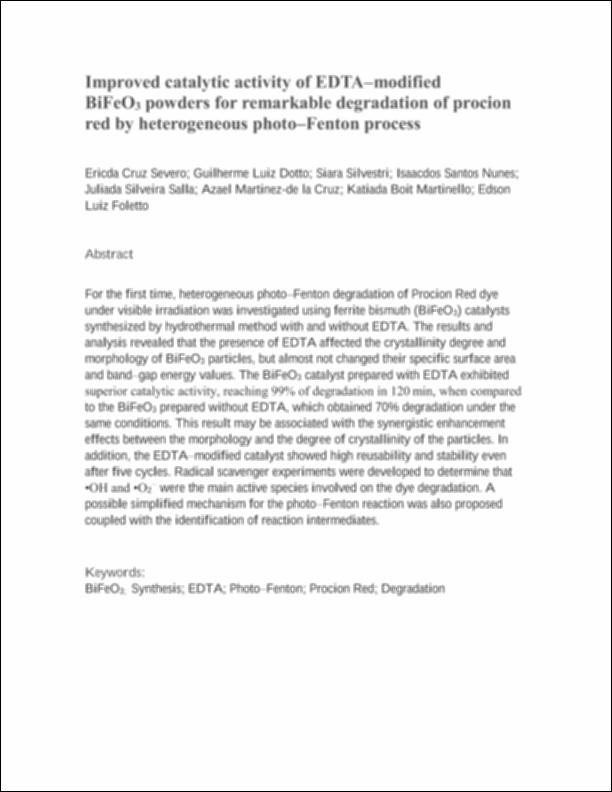 For the first time, heterogeneous photo–Fenton degradation of Procion Red dye under visible irradiation was investigated using ferrite bismuth (BiFeO3) catalysts synthesized by hydrothermal method with and without EDTA. The results and analysis revealed that the presence of EDTA affected the crystallinity degree and morphology of BiFeO3 particles, but almost not changed their specific surface area and band–gap energy values. The BiFeO3 catalyst prepared with EDTA exhibited superior catalytic activity, reaching 99% of degradation in 120 min, when compared to the BiFeO3 prepared without EDTA, which obtained 70% degradation under the same conditions. This result may be associated with the synergistic enhancement effects between the morphology and the degree of crystallinity of the particles. In addition, the EDTA–modified catalyst showed high reusability and stability even after five cycles. Radical scavenger experiments were developed to determine that •OH and •O2− were the main active species involved on the dye degradation. A possible simplified mechanism for the photo–Fenton reaction was also proposed coupled with the identification of reaction intermediates.
Collections