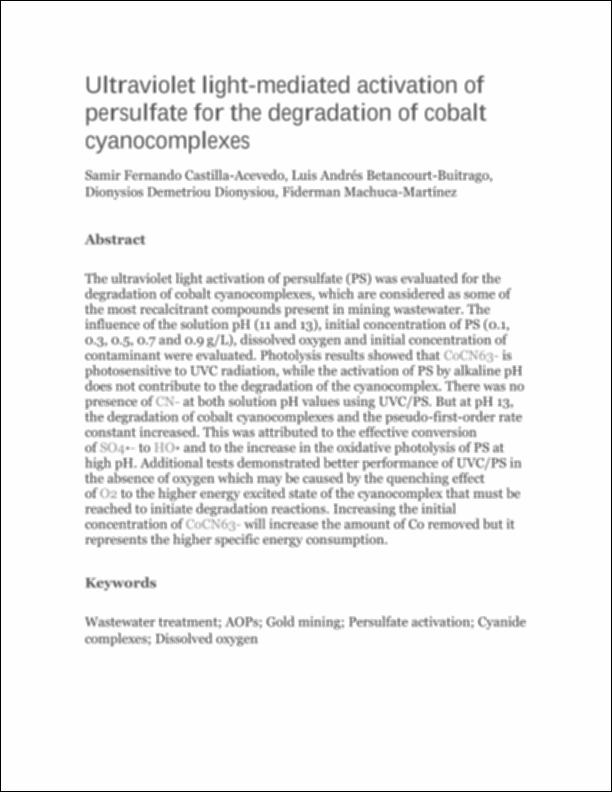 Ultraviolet light-mediated activation of persulfate for the degradation of cobalt cyanocomplexes.pdf (313.0Kb)
Author

The ultraviolet light activation of persulfate (PS) was evaluated for the degradation of cobalt cyanocomplexes, which are considered as some of the most recalcitrant compounds present in mining wastewater. The influence of the solution pH (11 and 13), initial concentration of PS (0.1, 0.3, 0.5, 0.7 and 0.9 g/L), dissolved oxygen and initial concentration of contaminant were evaluated. Photolysis results showed that CoCN63- is photosensitive to UVC radiation, while the activation of PS by alkaline pH does not contribute to the degradation of the cyanocomplex. There was no presence of CN- at both solution pH values using UVC/PS. But at pH 13, the degradation of cobalt cyanocomplexes and the pseudo-first-order rate constant increased. This was attributed to the effective conversion of SO4•- to HO• and to the increase in the oxidative photolysis of PS at high pH. Additional tests demonstrated better performance of UVC/PS in the absence of oxygen which may be caused by the quenching effect of O2 to the higher energy excited state of the cyanocomplex that must be reached to initiate degradation reactions. Increasing the initial concentration of CoCN63- will increase the amount of Co removed but it represents the higher specific energy consumption.
Collections