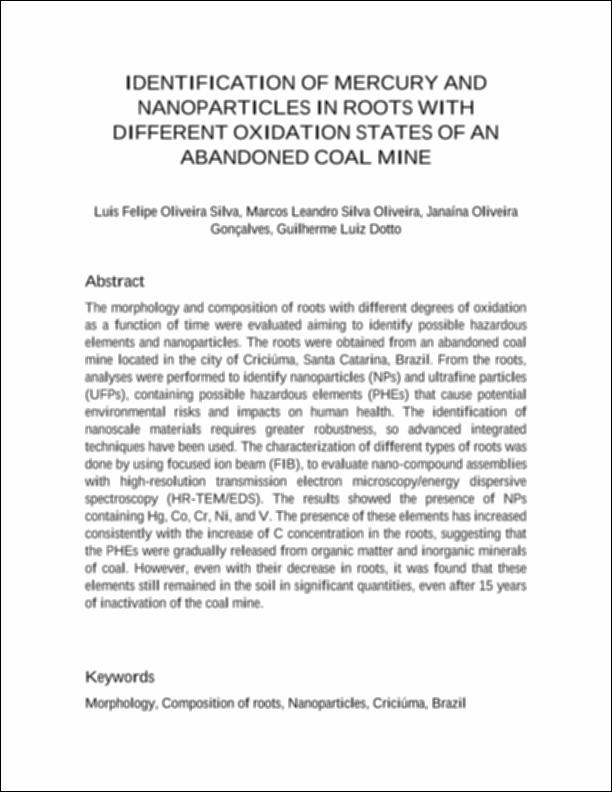 IDENTIFICATION OF MERCURY AND NANOPARTICLES IN ROOTS WITH DIFFERENT OXIDATION STATES OF AN ABANDONED COAL MINE (7.178Kb)
Author

The morphology and composition of roots with different degrees of oxidation as a function of time were evaluated aiming to identify possible hazardous elements and nanoparticles. The roots were obtained from an abandoned coal mine located in the city of Criciúma, Santa Catarina, Brazil. From the roots, analyses were performed to identify nanoparticles (NPs) and ultrafine particles (UFPs), containing possible hazardous elements (PHEs) that cause potential environmental risks and impacts on human health. The identification of nanoscale materials requires greater robustness, so advanced integrated techniques have been used. The characterization of different types of roots was done by using focused ion beam (FIB), to evaluate nano-compound assemblies with high-resolution transmission electron microscopy/energy dispersive spectroscopy (HR-TEM/EDS). The results showed the presence of NPs containing Hg, Co, Cr, Ni, and V. The presence of these elements has increased consistently with the increase of C concentration in the roots, suggesting that the PHEs were gradually released from organic matter and inorganic minerals of coal. However, even with their decrease in roots, it was found that these elements still remained in the soil in significant quantities, even after 15 years of inactivation of the coal mine.
Collections