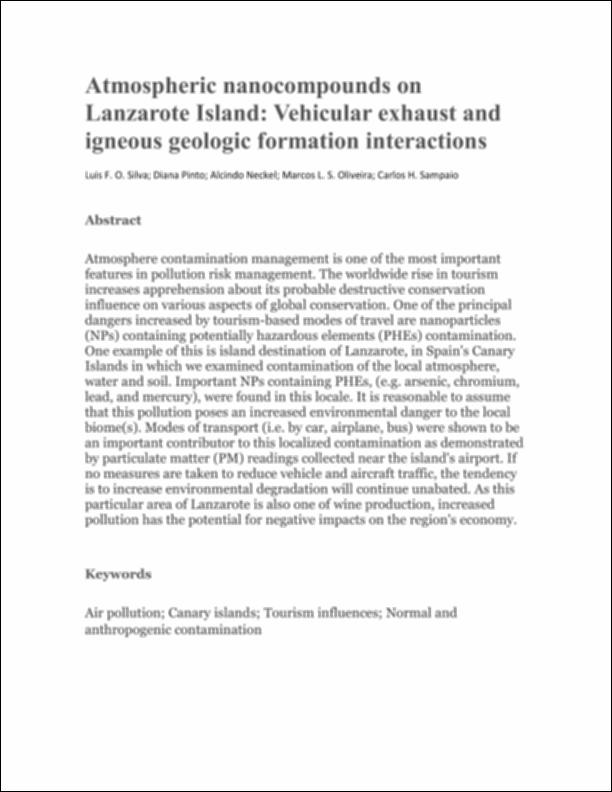 Atmosphere contamination management is one of the most important features in pollution risk management. The worldwide rise in tourism increases apprehension about its probable destructive conservation influence on various aspects of global conservation. One of the principal dangers increased by tourism-based modes of travel are nanoparticles (NPs) containing potentially hazardous elements (PHEs) contamination. One example of this is island destination of Lanzarote, in Spain's Canary Islands in which we examined contamination of the local atmosphere, water and soil. Important NPs containing PHEs, (e.g. arsenic, chromium, lead, and mercury), were found in this locale. It is reasonable to assume that this pollution poses an increased environmental danger to the local biome(s). Modes of transport (i.e. by car, airplane, bus) were shown to be an important contributor to this localized contamination as demonstrated by particulate matter (PM) readings collected near the island's airport. If no measures are taken to reduce vehicle and aircraft traffic, the tendency is to increase environmental degradation will continue unabated. As this particular area of Lanzarote is also one of wine production, increased pollution has the potential for negative impacts on the region's economy.
Collections