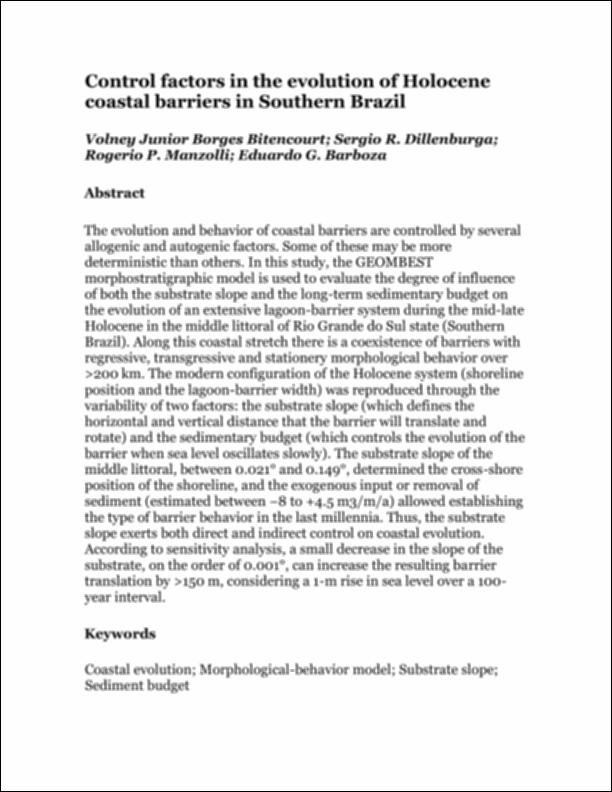 The evolution and behavior of coastal barriers are controlled by several allogenic and autogenic factors. Some of these may be more deterministic than others. In this study, the GEOMBEST morphostratigraphic model is used to evaluate the degree of influence of both the substrate slope and the long-term sedimentary budget on the evolution of an extensive lagoon-barrier system during the mid-late Holocene in the middle littoral of Rio Grande do Sul state (Southern Brazil). Along this coastal stretch there is a coexistence of barriers with regressive, transgressive and stationery morphological behavior over >200 km. The modern configuration of the Holocene system (shoreline position and the lagoon-barrier width) was reproduced through the variability of two factors: the substrate slope (which defines the horizontal and vertical distance that the barrier will translate and rotate) and the sedimentary budget (which controls the evolution of the barrier when sea level oscillates slowly). The substrate slope of the middle littoral, between 0.021° and 0.149°, determined the cross-shore position of the shoreline, and the exogenous input or removal of sediment (estimated between −8 to +4.5 m3/m/a) allowed establishing the type of barrier behavior in the last millennia. Thus, the substrate slope exerts both direct and indirect control on coastal evolution. According to sensitivity analysis, a small decrease in the slope of the substrate, on the order of 0.001°, can increase the resulting barrier translation by >150 m, considering a 1-m rise in sea level over a 100year interval.
Collections