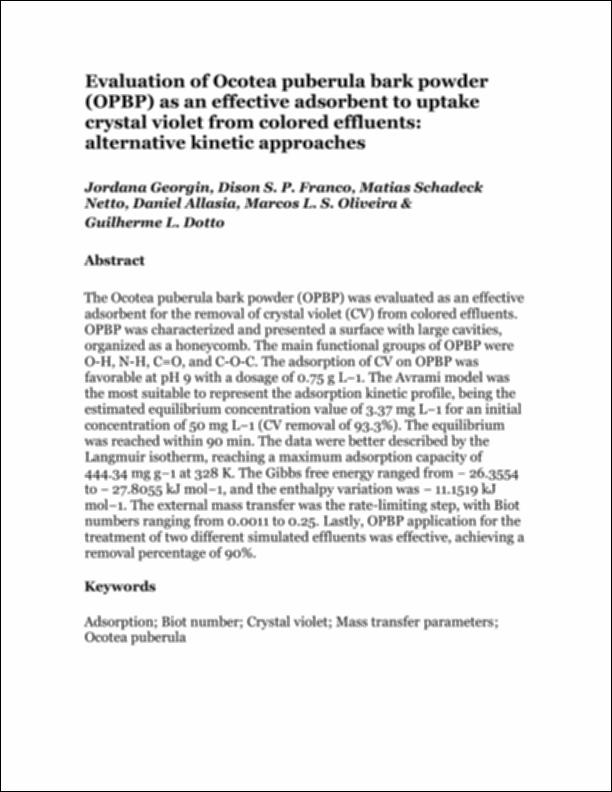 The Ocotea puberula bark powder (OPBP) was evaluated as an effective adsorbent for the removal of crystal violet (CV) from colored effluents. OPBP was characterized and presented a surface with large cavities, organized as a honeycomb. The main functional groups of OPBP were O-H, N-H, C=O, and C-O-C. The adsorption of CV on OPBP was favorable at pH 9 with a dosage of 0.75 g L−1. The Avrami model was the most suitable to represent the adsorption kinetic profile, being the estimated equilibrium concentration value of 3.37 mg L−1 for an initial concentration of 50 mg L−1 (CV removal of 93.3%). The equilibrium was reached within 90 min. The data were better described by the Langmuir isotherm, reaching a maximum adsorption capacity of 444.34 mg g−1 at 328 K. The Gibbs free energy ranged from − 26.3554 to − 27.8055 kJ mol−1, and the enthalpy variation was − 11.1519 kJ mol−1. The external mass transfer was the rate-limiting step, with Biot numbers ranging from 0.0011 to 0.25. Lastly, OPBP application for the treatment of two different simulated effluents was effective, achieving a removal percentage of 90%.
Collections