Predator–prey interactions in anurans of the tropical dry forests of the Colombian Caribbean: a functional approach 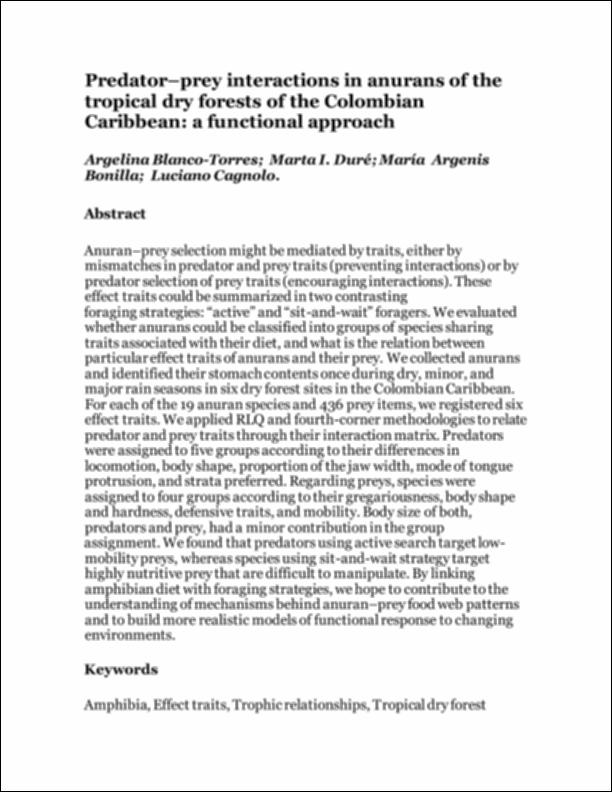 Predator–prey interactions in anurans of the tropical dry forests of the Colombian Caribbean.pdf (105.9Kb)
Author

Anuran–prey selection might be mediated by traits, either by mismatches in predator and prey traits (preventing interactions) or by predator selection of prey traits (encouraging interactions). These effect traits could be summarized in two contrasting foraging strategies: “active” and “sit-and-wait” foragers. We evaluated whether anurans could be classified into groups of species sharing traits associated with their diet, and what is the relation between particular effect traits of anurans and their prey. We collected anurans and identified their stomach contents once during dry, minor, and major rain seasons in six dry forest sites in the Colombian Caribbean. For each of the 19 anuran species and 436 prey items, we registered six effect traits. We applied RLQ and fourth-corner methodologies to relate predator and prey traits through their interaction matrix. Predators were assigned to five groups according to their differences in locomotion, body shape, proportion of the jaw width, mode of tongue protrusion, and strata preferred. Regarding preys, species were assigned to four groups according to their gregariousness, body shape and hardness, defensive traits, and mobility. Body size of both, predators and prey, had a minor contribution in the group assignment. We found that predators using active search target low-mobility preys, whereas species using sit-and-wait strategy target highly nutritive prey that are difficult to manipulate. By linking amphibian diet with foraging strategies, we hope to contribute to the understanding of mechanisms behind anuran–prey food web patterns and to build more realistic models of functional response to changing environments.
Collections