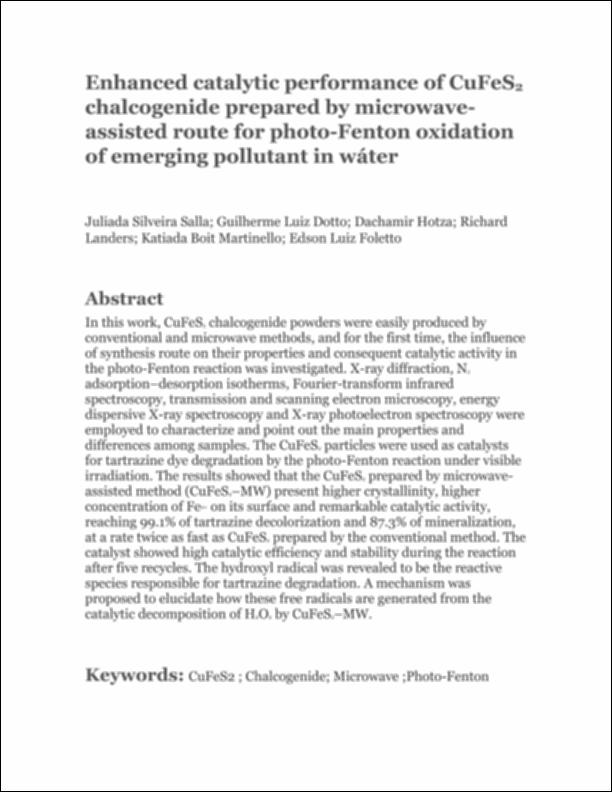 In this work, CuFeS2 chalcogenide powders were easily produced by conventional and microwave methods, and for the first time, the influence of synthesis route on their properties and consequent catalytic activity in the photo-Fenton reaction was investigated. X-ray diffraction, N2 adsorption–desorption isotherms, Fourier-transform infrared spectroscopy, transmission and scanning electron microscopy, energy dispersive X-ray spectroscopy and X-ray photoelectron spectroscopy were employed to characterize and point out the main properties and differences among samples. The CuFeS2 particles were used as catalysts for tartrazine dye degradation by the photo-Fenton reaction under visible irradiation. The results showed that the CuFeS2 prepared by microwave-assisted method (CuFeS2–MW) present higher crystallinity, higher concentration of Fe2+ on its surface and remarkable catalytic activity, reaching 99.1% of tartrazine decolorization and 87.3% of mineralization, at a rate twice as fast as CuFeS2 prepared by the conventional method. The catalyst showed high catalytic efficiency and stability during the reaction after five recycles. The hydroxyl radical was revealed to be the reactive species responsible for tartrazine degradation. A mechanism was proposed to elucidate how these free radicals are generated from the catalytic decomposition of H2O2 by CuFeS2–MW.
Collections