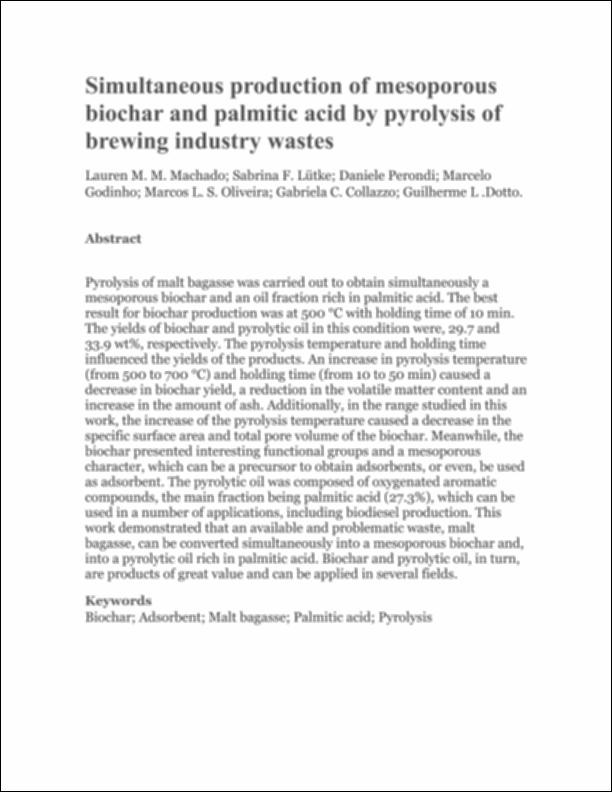 Pyrolysis of malt bagasse was carried out to obtain simultaneously a mesoporous biochar and an oil fraction rich in palmitic acid. The best result for biochar production was at 500 °C with holding time of 10 min. The yields of biochar and pyrolytic oil in this condition were, 29.7 and 33.9 wt%, respectively. The pyrolysis temperature and holding time influenced the yields of the products. An increase in pyrolysis temperature (from 500 to 700 °C) and holding time (from 10 to 50 min) caused a decrease in biochar yield, a reduction in the volatile matter content and an increase in the amount of ash. Additionally, in the range studied in this work, the increase of the pyrolysis temperature caused a decrease in the specific surface area and total pore volume of the biochar. Meanwhile, the biochar presented interesting functional groups and a mesoporous character, which can be a precursor to obtain adsorbents, or even, be used as adsorbent. The pyrolytic oil was composed of oxygenated aromatic compounds, the main fraction being palmitic acid (27.3%), which can be used in a number of applications, including biodiesel production. This work demonstrated that an available and problematic waste, malt bagasse, can be converted simultaneously into a mesoporous biochar and, into a pyrolytic oil rich in palmitic acid. Biochar and pyrolytic oil, in turn, are products of great value and can be applied in several fields.
Collections