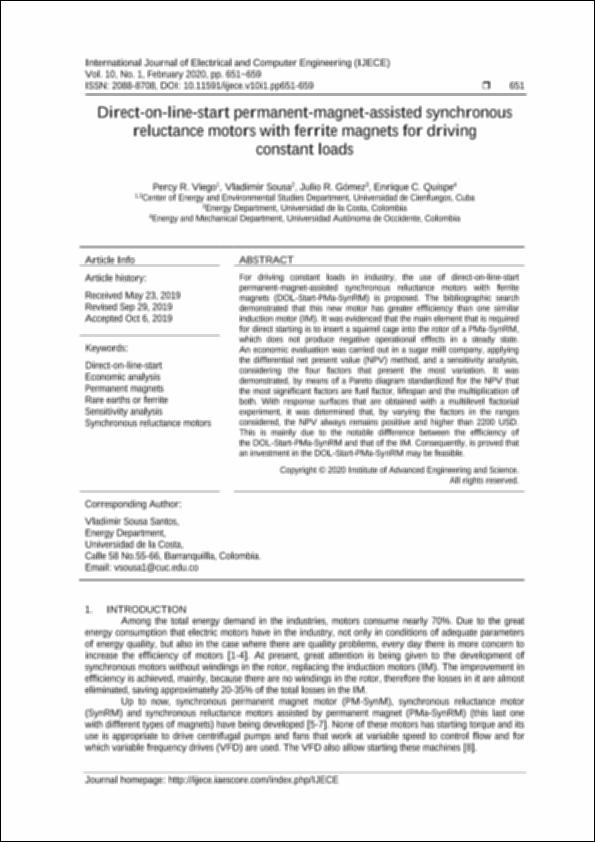 For driving constant loads in industry, the use of direct-on-line-start permanent-magnet-assisted synchronous reluctance motors with ferrite magnets (DOL-Start-PMa-SynRM) is proposed. The bibliographic search demonstrated that this new motor has greater efficiency than one similar induction motor (IM). It was evidenced that the main element that is required for direct starting is to insert a squirrel cage into the rotor of a PMa-SynRM, which does not produce negative operational effects in a steady state. An economic evaluation was carried out in a sugar mill company, applying the differential net present value (NPV) method, and a sensitivity analysis, considering the four factors that present the most variation. It was demonstrated, by means of a Pareto diagram standardized for the NPV that the most significant factors are fuel factor, lifespan and the multiplication of both. With response surfaces that are obtained with a multilevel factorial experiment, it was determined that, by varying the factors in the ranges considered, the NPV always remains positive and higher than 2200 USD. This is mainly due to the notable difference between the efficiency of the DOL-Start-PMa-SynRM and that of the IM. Consequently, is proved that an investment in the DOL-Start-PMa-SynRM may be feasible.
Collections