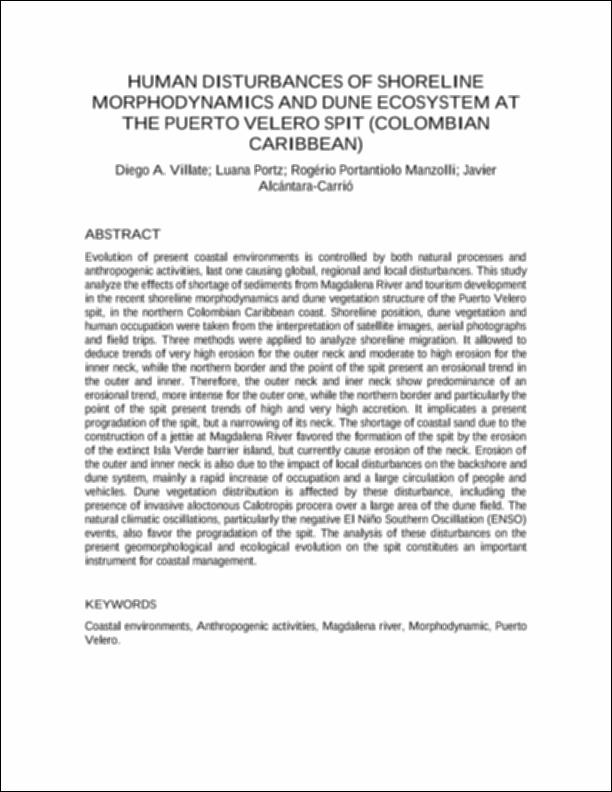 Evolution of present coastal environments is controlled by both natural processes and anthropogenic activities, last one causing global, regional and local disturbances. This study analyze the effects of shortage of sediments from Magdalena River and tourism development in the recent shoreline morphodynamics and dune vegetation structure of the Puerto Velero spit, in the northern Colombian Caribbean coast. Shoreline position, dune vegetation and human occupation were taken from the interpretation of satellite images, aerial photographs and field trips. Three methods were applied to analyze shoreline migration. It allowed to deduce trends of very high erosion for the outer neck and moderate to high erosion for the inner neck, while the northern border and the point of the spit present an erosional trend in the outer and inner. Therefore, the outer neck and iner neck show predominance of an erosional trend, more intense for the outer one, while the northern border and particularly the point of the spit present trends of high and very high accretion. It implicates a present progradation of the spit, but a narrowing of its neck. The shortage of coastal sand due to the construction of a jettie at Magdalena River favored the formation of the spit by the erosion of the extinct Isla Verde barrier island, but currently cause erosion of the neck. Erosion of the outer and inner neck is also due to the impact of local disturbances on the backshore and dune system, mainly a rapid increase of occupation and a large circulation of people and vehicles. Dune vegetation distribution is affected by these disturbance, including the presence of invasive aloctonous Calotropis procera over a large area of the dune field. The natural climatic oscillations, particularly the negative El Niño Southern Oscillation (ENSO) events, also favor the progradation of the spit. The analysis of these disturbances on the present geomorphological and ecological evolution on the spit constitutes an important instrument for coastal management.
Collections