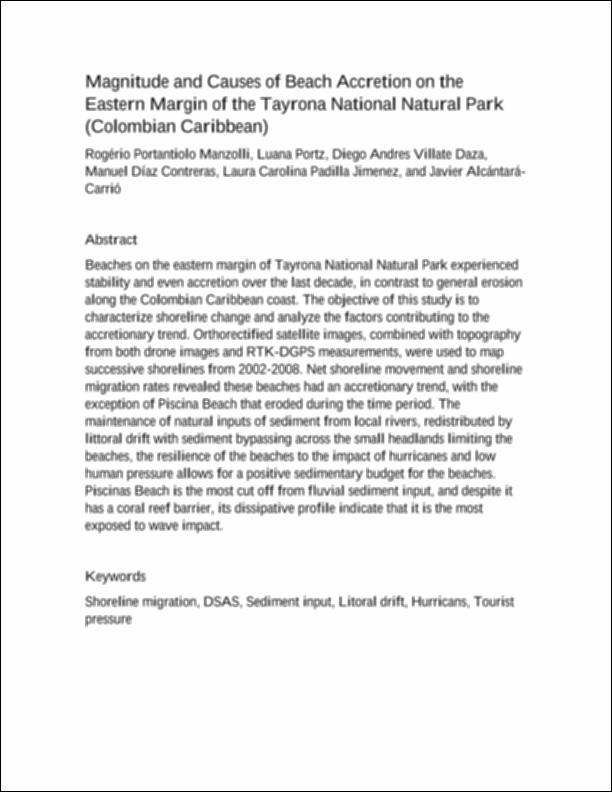 Magnitude and Causes of Beach Accretion on the Eastern Margin of the Tayrona National Natural Park (Colombian Caribbean).pdf (6.391Kb)
Author

Beaches on the eastern margin of Tayrona National Natural Park experienced stability and even accretion over the last decade, in contrast to general erosion along the Colombian Caribbean coast. The objective of this study is to characterize shoreline change and analyze the factors contributing to the accretionary trend. Orthorectified satellite images, combined with topography from both drone images and RTK-DGPS measurements, were used to map successive shorelines from 2002-2008. Net shoreline movement and shoreline migration rates revealed these beaches had an accretionary trend, with the exception of Piscina Beach that eroded during the time period. The maintenance of natural inputs of sediment from local rivers, redistributed by littoral drift with sediment bypassing across the small headlands limiting the beaches, the resilience of the beaches to the impact of hurricanes and low human pressure allows for a positive sedimentary budget for the beaches. Piscinas Beach is the most cut off from fluvial sediment input, and despite it has a coral reef barrier, its dissipative profile indicate that it is the most exposed to wave impact.
Collections