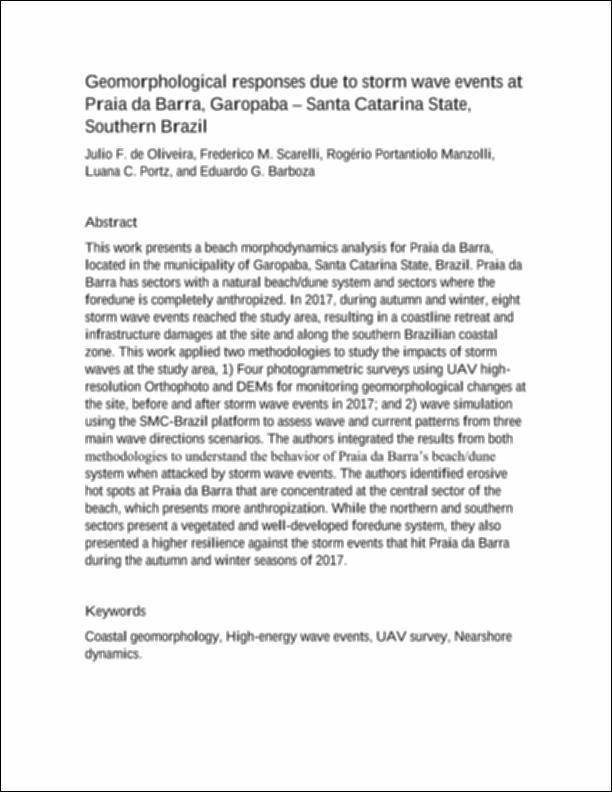 This work presents a beach morphodynamics analysis for Praia da Barra, located in the municipality of Garopaba, Santa Catarina State, Brazil. Praia da Barra has sectors with a natural beach/dune system and sectors where the foredune is completely anthropized. In 2017, during autumn and winter, eight storm wave events reached the study area, resulting in a coastline retreat and infrastructure damages at the site and along the southern Brazilian coastal zone. This work applied two methodologies to study the impacts of storm waves at the study area, 1) Four photogrammetric surveys using UAV high-resolution Orthophoto and DEMs for monitoring geomorphological changes at the site, before and after storm wave events in 2017; and 2) wave simulation using the SMC-Brazil platform to assess wave and current patterns from three main wave directions scenarios. The authors integrated the results from both methodologies to understand the behavior of Praia da Barra’s beach/dune system when attacked by storm wave events. The authors identified erosive hot spots at Praia da Barra that are concentrated at the central sector of the beach, which presents more anthropization. While the northern and southern sectors present a vegetated and well-developed foredune system, they also presented a higher resilience against the storm events that hit Praia da Barra during the autumn and winter seasons of 2017.
Collections