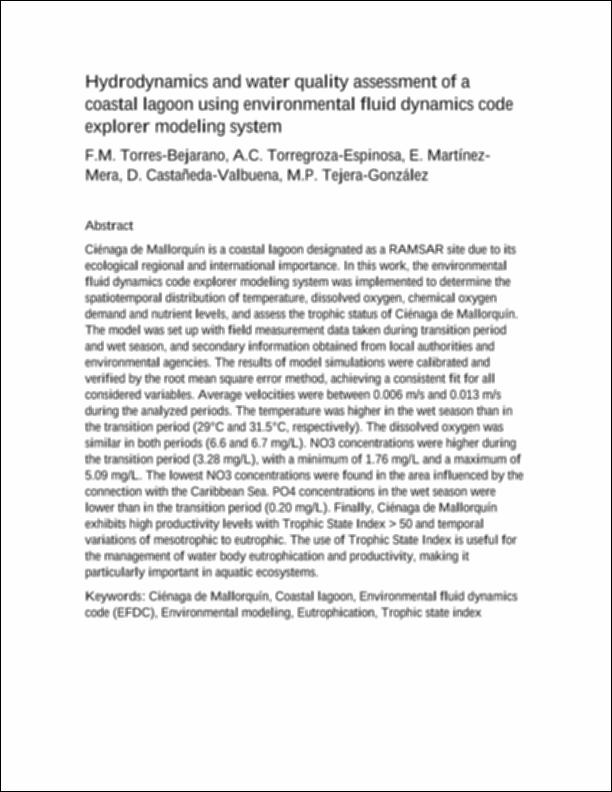 Ciénaga de Mallorquín is a coastal lagoon designated as a RAMSAR site due to its ecological regional and international importance. In this work, the environmental fluid dynamics code explorer modeling system was implemented to determine the spatiotemporal distribution of temperature, dissolved oxygen, chemical oxygen demand and nutrient levels, and assess the trophic status of Ciénaga de Mallorquín. The model was set up with field measurement data taken during transition period and wet season, and secondary information obtained from local authorities and environmental agencies. The results of model simulations were calibrated and verified by the root mean square error method, achieving a consistent fit for all considered variables. Average velocities were between 0.006 m/s and 0.013 m/s during the analyzed periods. The temperature was higher in the wet season than in the transition period (29°C and 31.5°C, respectively). The dissolved oxygen was similar in both periods (6.6 and 6.7 mg/L). NO3 concentrations were higher during the transition period (3.28 mg/L), with a minimum of 1.76 mg/L and a maximum of 5.09 mg/L. The lowest NO3 concentrations were found in the area influenced by the connection with the Caribbean Sea. PO4 concentrations in the wet season were lower than in the transition period (0.20 mg/L). Finally, Ciénaga de Mallorquín exhibits high productivity levels with Trophic State Index > 50 and temporal variations of mesotrophic to eutrophic. The use of Trophic State Index is useful for the management of water body eutrophication and productivity, making it particularly important in aquatic ecosystems.
Collections