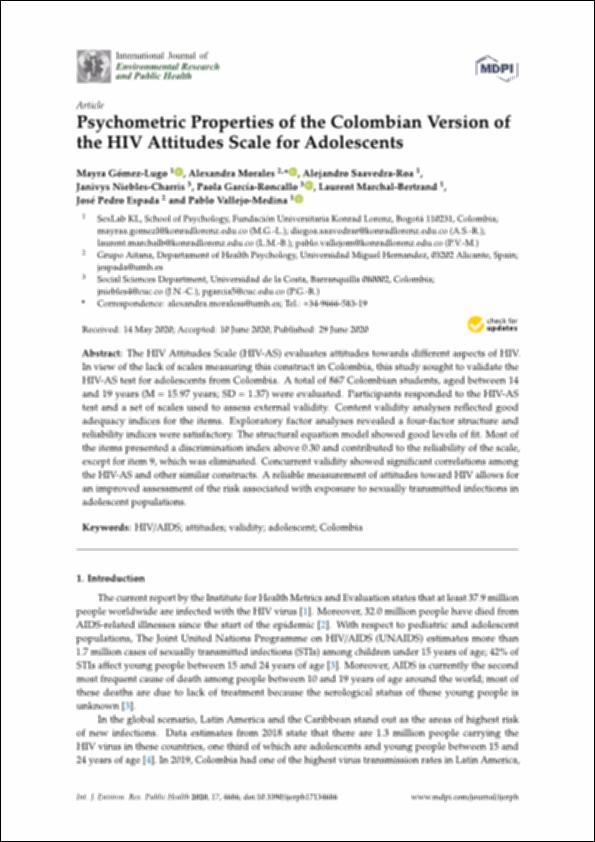 Psychometric properties of the Colombian version of the HIV attitudes scale for adolescents.pdf (519.9Kb)
Author

The HIV Attitudes Scale (HIV-AS) evaluates attitudes towards different aspects of HIV. In view of the lack of scales measuring this construct in Colombia, this study sought to validate the HIV-AS test for adolescents from Colombia. A total of 867 Colombian students, aged between 14 and 19 years (M = 15.97 years; SD = 1.37) were evaluated. Participants responded to the HIV-AS test and a set of scales used to assess external validity. Content validity analyses reflected good adequacy indices for the items. Exploratory factor analyses revealed a four-factor structure and reliability indices were satisfactory. The structural equation model showed good levels of fit. Most of the items presented a discrimination index above 0.30 and contributed to the reliability of the scale, except for item 9, which was eliminated. Concurrent validity showed significant correlations among the HIV-AS and other similar constructs. A reliable measurement of attitudes toward HIV allows for an improved assessment of the risk associated with exposure to sexually transmitted infections in adolescent populations.
Collections