PSU19 characterization of adverse events in the service of plastic and reconstructive surgery in hospital institutions of Barranquilla, 2016-2017 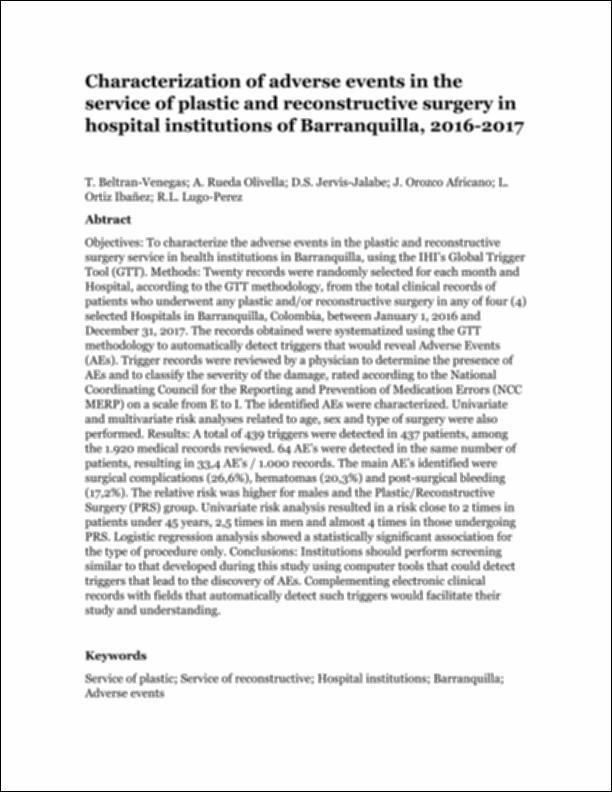 Characterization of adverse events in the service of plastic and reconstructive surgery in hospital institutions of Barranquilla.pdf (56.15Kb)
Author

Objectives: To characterize the adverse events in the plastic and reconstructive surgery service in health institutions in Barranquilla, using the IHI’s Global Trigger Tool (GTT). Methods: Twenty records were randomly selected for each month and Hospital, according to the GTT methodology, from the total clinical records of patients who underwent any plastic and/or reconstructive surgery in any of four (4) selected Hospitals in Barranquilla, Colombia, between January 1, 2016 and December 31, 2017. The records obtained were systematized using the GTT methodology to automatically detect triggers that would reveal Adverse Events (AEs). Trigger records were reviewed by a physician to determine the presence of AEs and to classify the severity of the damage, rated according to the National Coordinating Council for the Reporting and Prevention of Medication Errors (NCC MERP) on a scale from E to I. The identified AEs were characterized. Univariate and multivariate risk analyses related to age, sex and type of surgery were also performed. Results: A total of 439 triggers were detected in 437 patients, among the 1.920 medical records reviewed. 64 AE’s were detected in the same number of patients, resulting in 33,4 AE’s / 1.000 records. The main AE’s identified were surgical complications (26,6%), hematomas (20,3%) and post-surgical bleeding (17,2%). The relative risk was higher for males and the Plastic/Reconstructive Surgery (PRS) group. Univariate risk analysis resulted in a risk close to 2 times in patients under 45 years, 2,5 times in men and almost 4 times in those undergoing PRS. Logistic regression analysis showed a statistically significant association for the type of procedure only. Conclusions: Institutions should perform screening similar to that developed during this study using computer tools that could detect triggers that lead to the discovery of AEs. Complementing electronic clinical records with fields that automatically detect such triggers would facilitate their study and understanding.
Collections