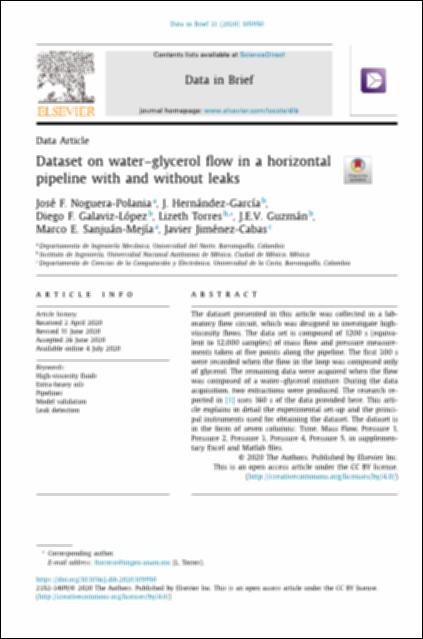 The dataset presented in this article was collected in a laboratory flow circuit, which was designed to investigate highviscosity flows. The data set is composed of 1200 s (equivalent to 12,000 samples) of mass flow and pressure measurements taken at five points along the pipeline. The first 300 s were recorded when the flow in the loop was composed only of glycerol. The remaining data were acquired when the flow was composed of a water–glycerol mixture. During the data acquisition, two extractions were produced. The research reported in [1] uses 160 s of the data provided here. This article explains in detail the experimental set-up and the principal instruments used for obtaining the dataset. The dataset is in the form of seven columns: Time, Mass Flow, Pressure 1, Pressure 2, Pressure 3, Pressure 4, Pressure 5, in supplementary Excel and Matlab files.
Collections