Enhancement of the adsorption of hexacyanoferrate (III) ion on granular activated carbon by the addition of cations: a promissory application to mining wastewater treatment 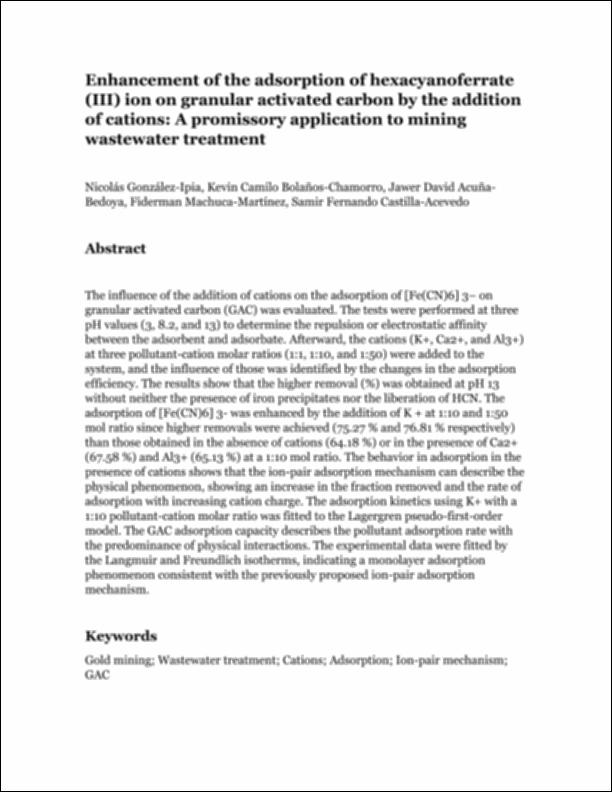 Enhancement of the adsorption of hexacyanoferrate (III) ion on granular activated carbon by the addition of cations.pdf (54.49Kb)
Author

The influence of the addition of cations on the adsorption of [Fe(CN)6] 3− on granular activated carbon (GAC) was evaluated. The tests were performed at three pH values (3, 8.2, and 13) to determine the repulsion or electrostatic affinity between the adsorbent and adsorbate. Afterward, the cations (K+, Ca2+, and Al3+) at three pollutant-cation molar ratios (1:1, 1:10, and 1:50) were added to the system, and the influence of those was identified by the changes in the adsorption efficiency. The results show that the higher removal (%) was obtained at pH 13 without neither the presence of iron precipitates nor the liberation of HCN. The adsorption of [Fe(CN)6] 3- was enhanced by the addition of K + at 1:10 and 1:50 mol ratio since higher removals were achieved (75.27 % and 76.81 % respectively) than those obtained in the absence of cations (64.18 %) or in the presence of Ca2+ (67.58 %) and Al3+ (65.13 %) at a 1:10 mol ratio. The behavior in adsorption in the presence of cations shows that the ion-pair adsorption mechanism can describe the physical phenomenon, showing an increase in the fraction removed and the rate of adsorption with increasing cation charge. The adsorption kinetics using K+ with a 1:10 pollutant-cation molar ratio was fitted to the Lagergren pseudo-first-order model. The GAC adsorption capacity describes the pollutant adsorption rate with the predominance of physical interactions. The experimental data were fitted by the Langmuir and Freundlich isotherms, indicating a monolayer adsorption phenomenon consistent with the previously proposed ion-pair adsorption mechanism.
Collections