Hazardous elements in the soil of urban cemeteries; constructive solutions aimed at sustainability 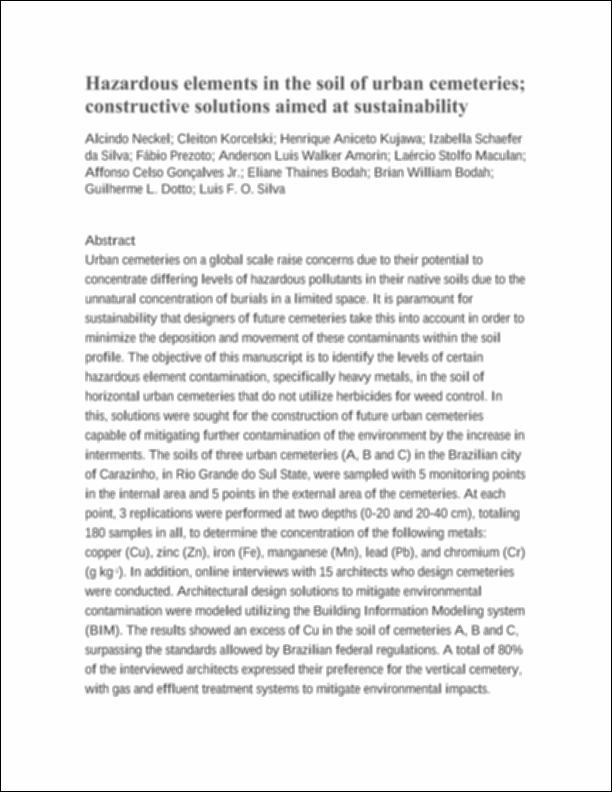 Urban cemeteries on a global scale raise concerns due to their potential to concentrate differing levels of hazardous pollutants in their native soils due to the unnatural concentration of burials in a limited space. It is paramount for sustainability that designers of future cemeteries take this into account in order to minimize the deposition and movement of these contaminants within the soil profile. The objective of this manuscript is to identify the levels of certain hazardous element contamination, specifically heavy metals, in the soil of horizontal urban cemeteries that do not utilize herbicides for weed control. In this, solutions were sought for the construction of future urban cemeteries capable of mitigating further contamination of the environment by the increase in interments. The soils of three urban cemeteries (A, B and C) in the Brazilian city of Carazinho, in Rio Grande do Sul State, were sampled with 5 monitoring points in the internal area and 5 points in the external area of the cemeteries. At each point, 3 replications were performed at two depths (0-20 and 20-40 cm), totaling 180 samples in all, to determine the concentration of the following metals: copper (Cu), zinc (Zn), iron (Fe), manganese (Mn), lead (Pb), and chromium (Cr) (g kg-1). In addition, online interviews with 15 architects who design cemeteries were conducted. Architectural design solutions to mitigate environmental contamination were modeled utilizing the Building Information Modeling system (BIM). The results showed an excess of Cu in the soil of cemeteries A, B and C, surpassing the standards allowed by Brazilian federal regulations. A total of 80% of the interviewed architects expressed their preference for the vertical cemetery, with gas and effluent treatment systems to mitigate environmental impacts.
Collections