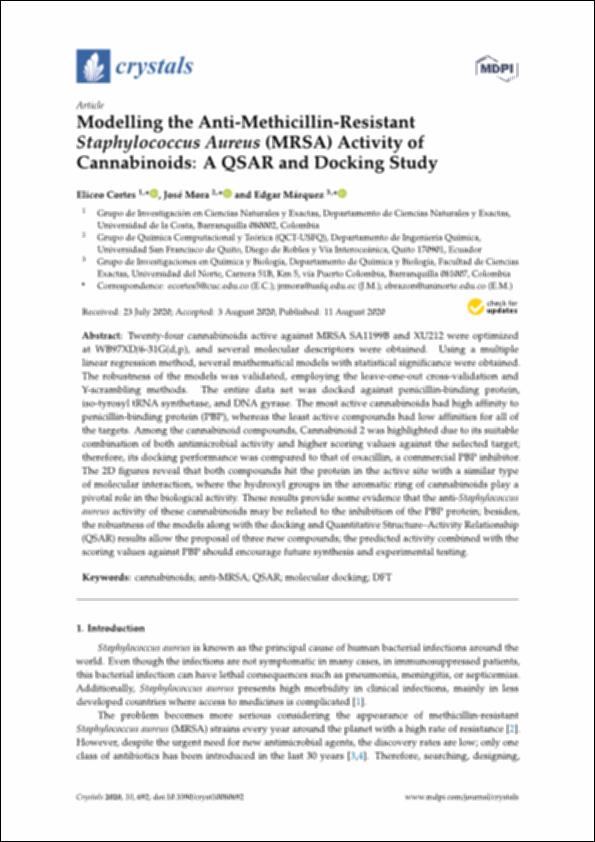 Twenty-four cannabinoids active against MRSA SA1199B and XU212 were optimized at WB97XD/6-31G(d,p), and several molecular descriptors were obtained. Using a multiple linear regression method, several mathematical models with statistical significance were obtained. The robustness of the models was validated, employing the leave-one-out cross-validation and Y-scrambling methods. The entire data set was docked against penicillin-binding protein, iso-tyrosyl tRNA synthetase, and DNA gyrase. The most active cannabinoids had high affinity to penicillin-binding protein (PBP), whereas the least active compounds had low affinities for all of the targets. Among the cannabinoid compounds, Cannabinoid 2 was highlighted due to its suitable combination of both antimicrobial activity and higher scoring values against the selected target; therefore, its docking performance was compared to that of oxacillin, a commercial PBP inhibitor. The 2D figures reveal that both compounds hit the protein in the active site with a similar type of molecular interaction, where the hydroxyl groups in the aromatic ring of cannabinoids play a pivotal role in the biological activity. These results provide some evidence that the anti-Staphylococcus aureus activity of these cannabinoids may be related to the inhibition of the PBP protein; besides, the robustness of the models along with the docking and Quantitative Structure–Activity Relationship (QSAR) results allow the proposal of three new compounds; the predicted activity combined with the scoring values against PBP should encourage future synthesis and experimental testing.
Collections