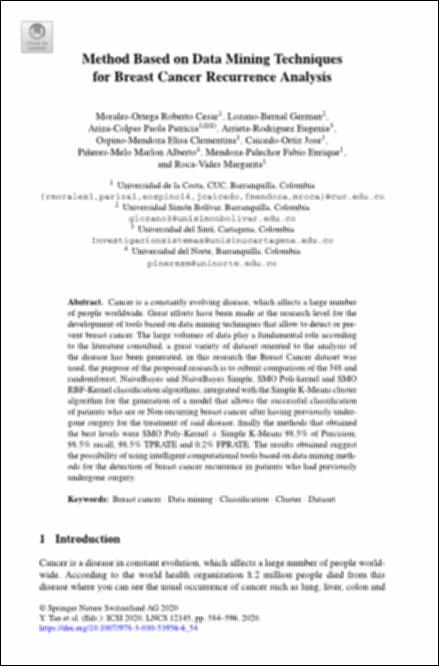 Cancer is a constantly evolving disease, which affects a large number of people worldwide. Great efforts have been made at the research level for the development of tools based on data mining techniques that allow to detect or prevent breast cancer. The large volumes of data play a fundamental role according to the literature consulted, a great variety of dataset oriented to the analysis of the disease has been generated, in this research the Breast Cancer dataset was used, the purpose of the proposed research is to submit comparison of the J48 and randomforest, NaiveBayes and NaiveBayes Simple, SMO Poli-kernel and SMO RBF-Kernel classification algorithms, integrated with the Simple K-Means cluster algorithm for the generation of a model that allows the successful classification of patients who are or Non-recurring breast cancer after having previously undergone surgery for the treatment of said disease, finally the methods that obtained the best levels were SMO Poly-Kernel + Simple K-Means 98.5% of Precision, 98.5% recall, 98.5% TPRATE and 0.2% FPRATE. The results obtained suggest the possibility of using intelligent computational tools based on data mining methods for the detection of breast cancer recurrence in patients who had previously undergone surgery.
Collections