Strategies for the management of the marine shoreline in the orla araranguá project (Santa Catarina, Brazil) 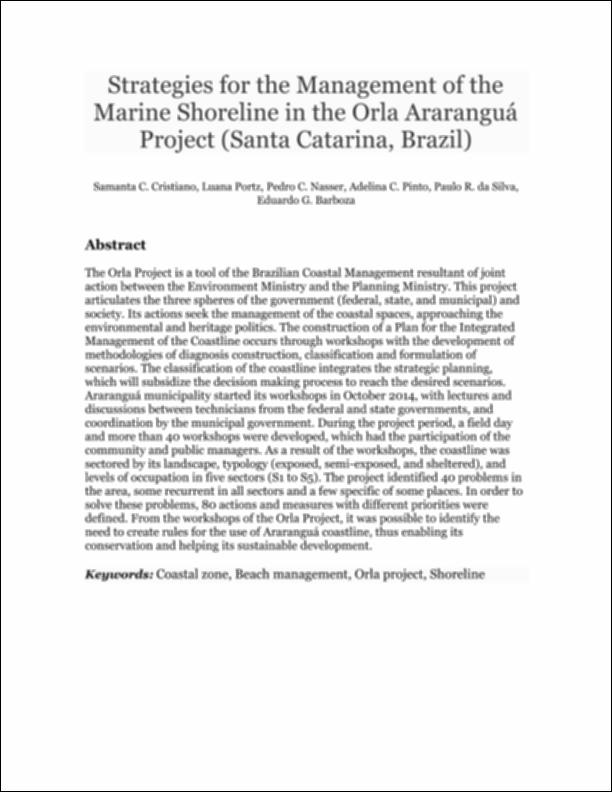 Strategies for the Management of the Marine Shoreline in the Orla Araranguá Project.pdf (277.8Kb)
Author

The Orla Project is a tool of the Brazilian Coastal Management resultant of joint action between the Environment Ministry and the Planning Ministry. This project articulates the three spheres of the government (federal, state, and municipal) and society. Its actions seek the management of the coastal spaces, approaching the environmental and heritage politics. The construction of a Plan for the Integrated Management of the Coastline occurs through workshops with the development of methodologies of diagnosis construction, classification and formulation of scenarios. The classification of the coastline integrates the strategic planning, which will subsidize the decision making process to reach the desired scenarios. Araranguá municipality started its workshops in October 2014, with lectures and discussions between technicians from the federal and state governments, and coordination by the municipal government. During the project period, a field day and more than 40 workshops were developed, which had the participation of the community and public managers. As a result of the workshops, the coastline was sectored by its landscape, typology (exposed, semi-exposed, and sheltered), and levels of occupation in five sectors (S1 to S5). The project identified 40 problems in the area, some recurrent in all sectors and a few specific of some places. In order to solve these problems, 80 actions and measures with different priorities were defined. From the workshops of the Orla Project, it was possible to identify the need to create rules for the use of Araranguá coastline, thus enabling its conservation and helping its sustainable development.
Collections