Driving and Alzheimer's disease: A neuropsychological screening battery for the elderly 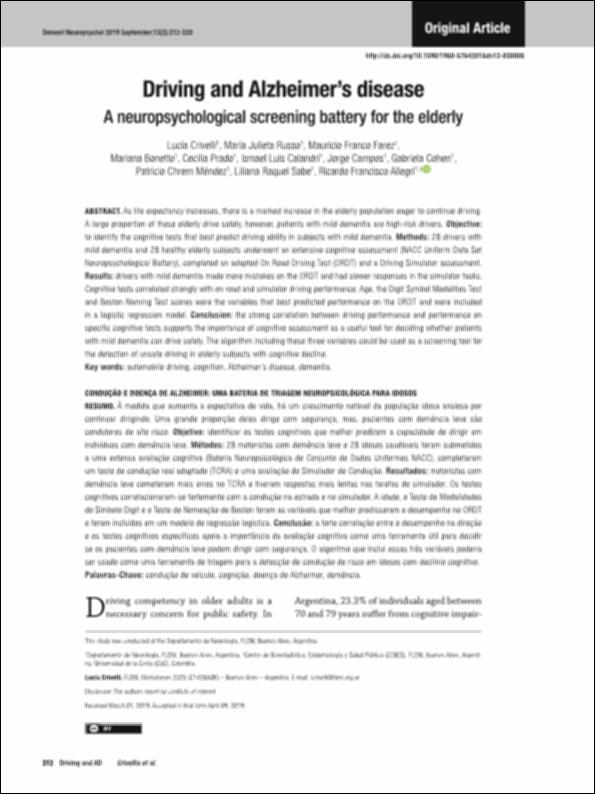 As life expectancy increases, there is a marked increase in the elderly population eager to continue driving. A large proportion of these elderly drive safely, however, patients with mild dementia are high-risk drivers. Objective: to identify the cognitive tests that best predict driving ability in subjects with mild dementia. Methods: 28 drivers with mild dementia and 28 healthy elderly subjects underwent an extensive cognitive assessment (NACC Uniform Data Set Neuropsychological Battery), completed an adapted On Road Driving Test (ORDT) and a Driving Simulator assessment. Results: drivers with mild dementia made more mistakes on the ORDT and had slower responses in the simulator tasks. Cognitive tests correlated strongly with on road and simulator driving performance. Age, the Digit Symbol Modalities Test and Boston Naming Test scores were the variables that best predicted performance on the ORDT and were included in a logistic regression model. Conclusion: the strong correlation between driving performance and performance on specific cognitive tests supports the importance of cognitive assessment as a useful tool for deciding whether patients with mild dementia can drive safely. The algorithm including these three variables could be used as a screening tool for the detection of unsafe driving in elderly subjects with cognitive decline.
Collections