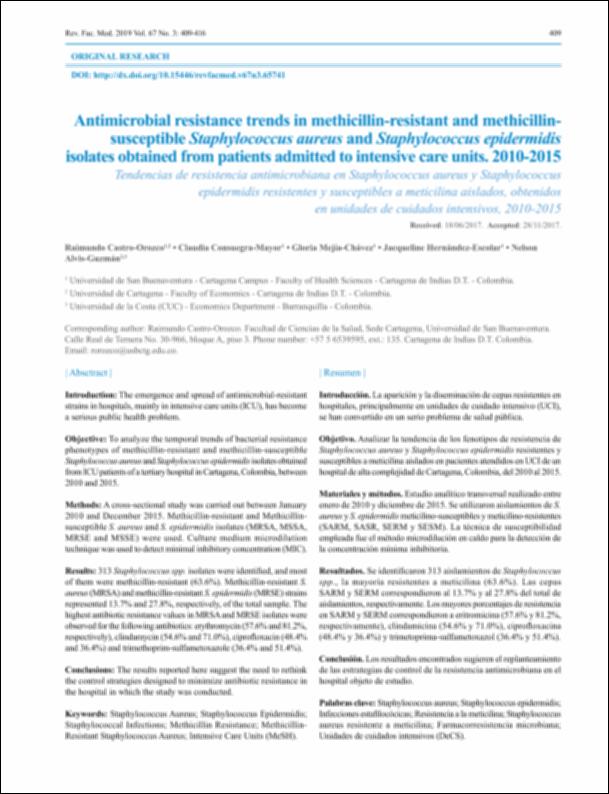 Introduction: The emergence and spread of antimicrobial-resistant strains in hospitals, mainly in intensive care units (ICU), has become a serious public health problem.Objective: To analyze the temporal trends of bacterial resistance phenotypes of methicillin-resistant and methicillin-susceptible Staphylococcus aureus and Staphylococcus epidermidis isolates obtained from ICU patients of a tertiary hospital in Cartagena, Colombia, between 2010 and 2015.Methods: A cross-sectional study was carried out between January 2010 and December 2015. Methicillin-resistant and Methicillin-susceptible S. aureus and S. epidermidis isolates (MRSA, MSSA, MRSE and MSSE) were used. Culture medium microdilution technique was used to detect minimal inhibitory concentration (MIC).Results: 313 Staphylococcus spp. isolates were identified, and most of them were methicillin-resistant (63.6%). Methicillin-resistant S. aureus (MRSA) and methicillin-resistant S. epidermidis (MRSE) strains represented 13.7% and 27.8%, respectively, of the total sample. The highest antibiotic resistance values in MRSA and MRSE isolates were observed for the following antibiotics: erythromycin (57.6% and 81.2%, respectively), clindamycin (54.6% and 71.0%), ciprofloxacin (48.4% and 36.4%) and trimethoprim-sulfametoxazole (36.4% and 51.4%). Conclusions: The results reported here suggest the need to rethink the control strategies designed to minimize antibiotic resistance in the hospital in which the study was conducted.
Collections