Trapping of Ag+, Cu2+, and Co2+ by faujasite zeolite Y: new interpretations of the adsorption mechanism via DFT and statistical modeling investigation 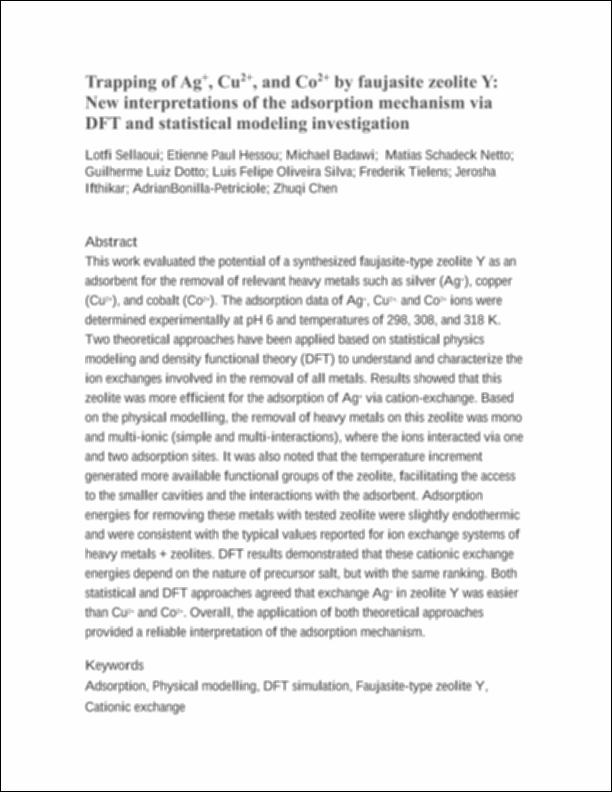 This work evaluated the potential of a synthesized faujasite-type zeolite Y as an adsorbent for the removal of relevant heavy metals such as silver (Ag+), copper (Cu2+), and cobalt (Co2+). The adsorption data of Ag+, Cu2+, and Co2+ ions were determined experimentally at pH 6 and temperatures of 298, 308, and 318 K. Two theoretical approaches have been applied based on statistical physics modeling and density functional theory (DFT) to understand and characterize the ion exchanges involved in the removal of all metals. Results showed that this zeolite was more efficient for the adsorption of Ag+ via cation-exchange. Based on the physical modelling, the removal of heavy metals on this zeolite was mono and multi-ionic (simple and multi-interactions), where the ions interacted via one and two adsorption sites. It was also noted that the temperature increment generated more available functional groups of the zeolite, facilitating the access to the smaller cavities and the interactions with the adsorbent. Adsorption energies for removing these metals with tested zeolite were slightly endothermic and were consistent with the typical values reported for ion exchange systems of heavy metals + zeolites. DFT results demonstrated that these cationic exchange energies depend on the nature of precursor salt, but with the same ranking. Both statistical and DFT approaches agreed that exchange Ag+ in zeolite Y was easier than Cu2+ and Co2+. Overall, the application of both theoretical approaches provided a reliable interpretation of the adsorption mechanism.
Collections