Indoor-outdoor relationships of airborne nanoparticles, BC and VOCs at rural and urban preschools 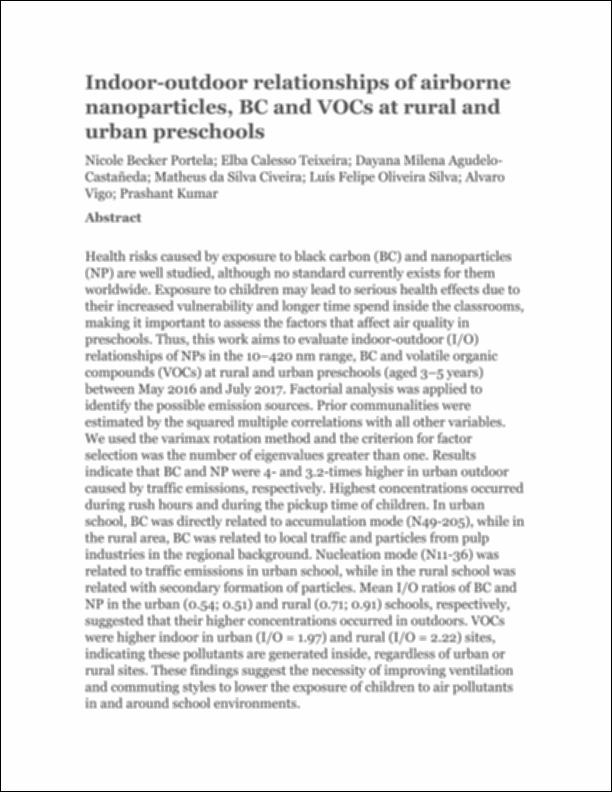 Indoor-outdoor relationships of airborne nanoparticles, BC and VOCs at rural and urban preschools.pdf (131.2Kb)
Author

Health risks caused by exposure to black carbon (BC) and nanoparticles (NP) are well studied, although no standard currently exists for them worldwide. Exposure to children may lead to serious health effects due to their increased vulnerability and longer time spend inside the classrooms, making it important to assess the factors that affect air quality in preschools. Thus, this work aims to evaluate indoor-outdoor (I/O) relationships of NPs in the 10–420 nm range, BC and volatile organic compounds (VOCs) at rural and urban preschools (aged 3–5 years) between May 2016 and July 2017. Factorial analysis was applied to identify the possible emission sources. Prior communalities were estimated by the squared multiple correlations with all other variables. We used the varimax rotation method and the criterion for factor selection was the number of eigenvalues greater than one. Results indicate that BC and NP were 4- and 3.2-times higher in urban outdoor caused by traffic emissions, respectively. Highest concentrations occurred during rush hours and during the pickup time of children. In urban school, BC was directly related to accumulation mode (N49-205), while in the rural area, BC was related to local traffic and particles from pulp industries in the regional background. Nucleation mode (N11-36) was related to traffic emissions in urban school, while in the rural school was related with secondary formation of particles. Mean I/O ratios of BC and NP in the urban (0.54; 0.51) and rural (0.71; 0.91) schools, respectively, suggested that their higher concentrations occurred in outdoors. VOCs were higher indoor in urban (I/O = 1.97) and rural (I/O = 2.22) sites, indicating these pollutants are generated inside, regardless of urban or rural sites. These findings suggest the necessity of improving ventilation and commuting styles to lower the exposure of children to air pollutants in and around school environments.
Collections