Particulate matter geochemistry of a highly industrialized region in the Caribbean: basis for future toxicological studies 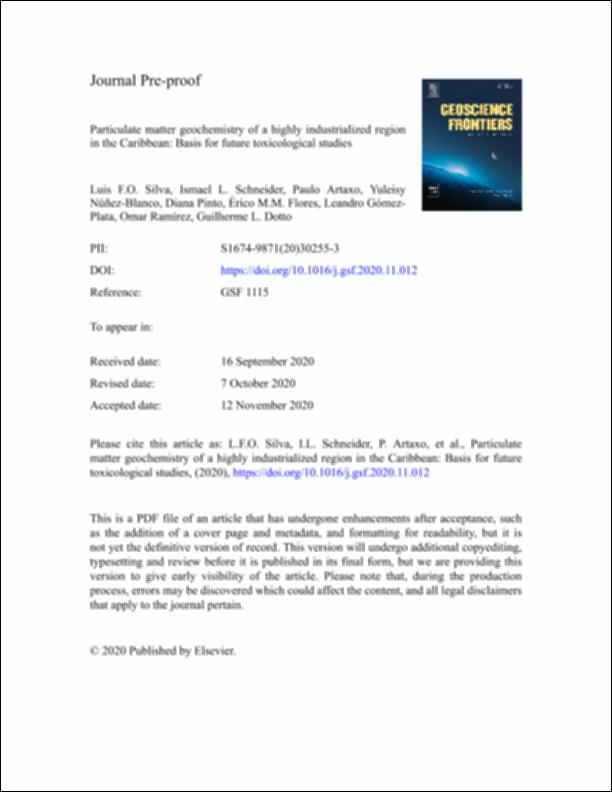 Air pollution has become an important issue, especially in Caribbean urban areas, and, particulate matter (PM) emitted by different natural and anthropogenic sources causes environmental and health issues. In this work, we studied the concentrations of PM10 and PM2.5 sources in an industrial and port urban area in the Caribbean region of Colombia. PM samples were collected within 48-h periods between April and October 2018 by using a Partisol 2000i-D sampler. Elemental geochemical characterization was performed by X-ray fluorescence (XRF) analysis. Further, ionic species and black carbon (BC) were quantified by ion chromatography and reflectance spectroscopy, respectively. Using the Positive Matrix Factorization (PMF) receptor model, the contributions of PM sources were quantified. The average concentration of PM10 was 46.6 ± 16.2 μg/m3, with high concentrations of Cl and Ca. For PM2.5, the average concentration was 12.0 ± 3.2 μg/m3, and the most abundant components were BC, S, and Cl. The receptor model identified five sources for PM10 and PM2.5. For both fractions, the contributions of marine sea spray, re-suspended soil, and vehicular traffic were observed. In addition, PM2.5 included two mixed sources were found to be fuel oil combustion with fertilizer industry emissions, and secondary aerosol sources with building construction emissions. Further, PM10 was found to also include building construction emissions with re-suspended soil, and metallurgical industry emissions. These obtained geochemical atmospheric results are important for the implementation of strategies for the continuous improvement of the air quality of the Caribbean region.
Collections