Spatial and temporal variability of temperature, salinity and chlorophyll-a in the Magdalena River mouth, Caribbean Sea 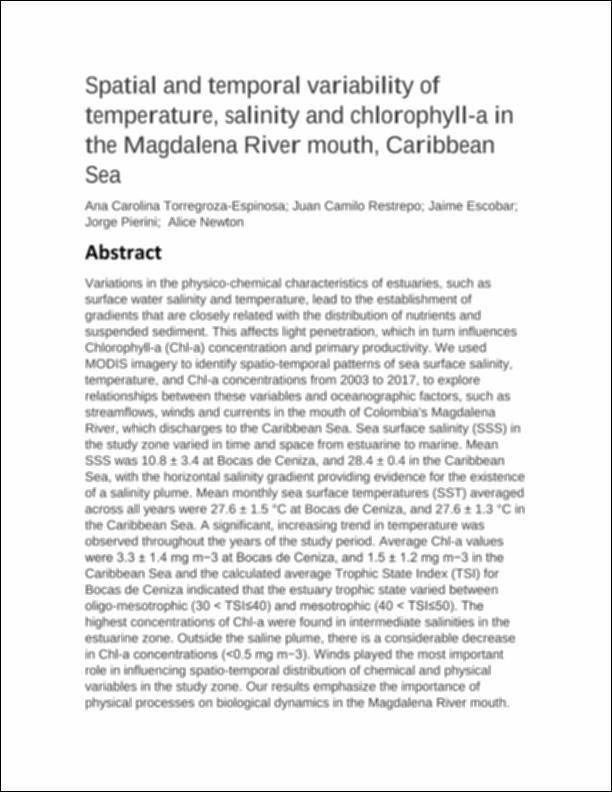 Variations in the physico-chemical characteristics of estuaries, such as surface water salinity and temperature, lead to the establishment of gradients that are closely related with the distribution of nutrients and suspended sediment. This affects light penetration, which in turn influences Chlorophyll-a (Chl-a) concentration and primary productivity. We used MODIS imagery to identify spatio-temporal patterns of sea surface salinity, temperature, and Chl-a concentrations from 2003 to 2017, to explore relationships between these variables and oceanographic factors, such as streamflows, winds and currents in the mouth of Colombia's Magdalena River, which discharges to the Caribbean Sea. Sea surface salinity (SSS) in the study zone varied in time and space from estuarine to marine. Mean SSS was 10.8 ± 3.4 at Bocas de Ceniza, and 28.4 ± 0.4 in the Caribbean Sea, with the horizontal salinity gradient providing evidence for the existence of a salinity plume. Mean monthly sea surface temperatures (SST) averaged across all years were 27.6 ± 1.5 °C at Bocas de Ceniza, and 27.6 ± 1.3 °C in the Caribbean Sea. A significant, increasing trend in temperature was observed throughout the years of the study period. Average Chl-a values were 3.3 ± 1.4 mg m−3 at Bocas de Ceniza, and 1.5 ± 1.2 mg m−3 in the Caribbean Sea and the calculated average Trophic State Index (TSI) for Bocas de Ceniza indicated that the estuary trophic state varied between oligo-mesotrophic (30 < TSI≤40) and mesotrophic (40 < TSI≤50). The highest concentrations of Chl-a were found in intermediate salinities in the estuarine zone. Outside the saline plume, there is a considerable decrease in Chl-a concentrations (<0.5 mg m−3). Winds played the most important role in influencing spatio-temporal distribution of chemical and physical variables in the study zone. Our results emphasize the importance of physical processes on biological dynamics in the Magdalena River mouth.
Collections