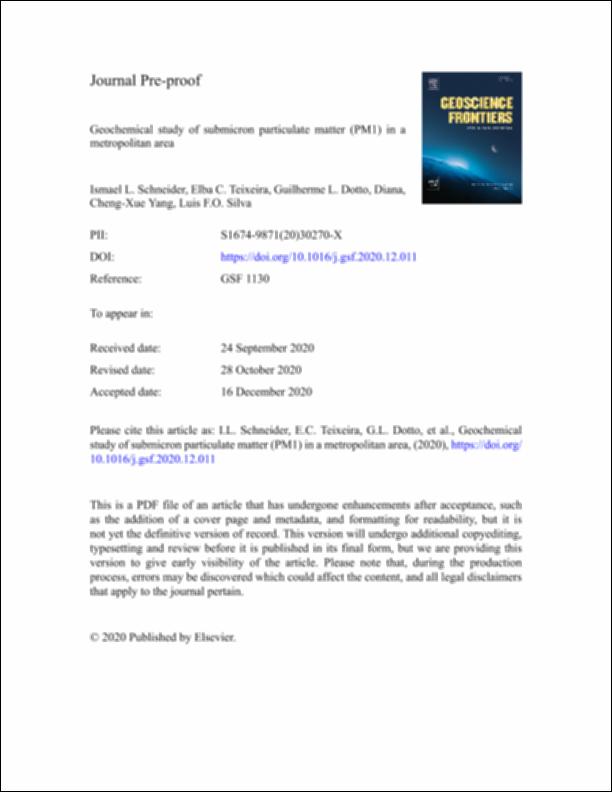 Air pollution has become a major problem in urban areas due to increasing industrialization and urbanization. In this study ambient concentrations of PM1 and metal concentrations as well as source contributions were identified and quantified by using Positive Matrix Factorization (PMF) in receptor modeling in the Metropolitan Area of Porto Alegre, Brazil. The PM1 samples were collected on PTFE filters from December 2012 to December 2014 in two sampling sites. Major ion and trace element concentrations were assessed. The average concentrations were 12.8 and 15.2 μg/m3 for Canoas and Sapucaia do Sul sites, respectively. Major ion contributions of PM1 were secondary pollutants such as sulfate and nitrate. Trace elements, especially Cu, Pb, Zn, Cd, and Ni also made important contributions which are directly associated with anthropogenic contributions. Our results show significantly higher levels in winter than in summer. Most of the PM1 and the analyzed PM species and elements originated from anthropogenic sources, especially road traffic, combustion processes and industrial activities, which are grouped in 7 major contributing sources. A back-trajectory analysis showed that the long-range transport of pollutants was not relevant in relation to the contribution to PM1 and metal concentrations. This work highlights the importance of urban planning to reduce human health exposure to traffic and industrial emissions, combined with awareness-raising actions for citizens concerning the impact of indoor sources.
Collections