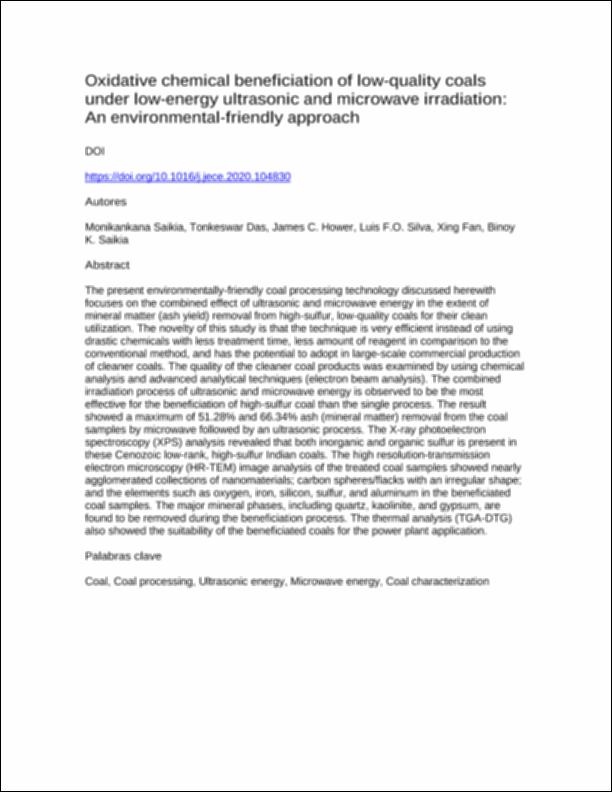 The present environmentally-friendly coal processing technology discussed herewith focuses on the combined effect of ultrasonic and microwave energy in the extent of mineral matter (ash yield) removal from high-sulfur, low-quality coals for their clean utilization. The novelty of this study is that the technique is very efficient instead of using drastic chemicals with less treatment time, less amount of reagent in comparison to the conventional method, and has the potential to adopt in large-scale commercial production of cleaner coals. The quality of the cleaner coal products was examined by using chemical analysis and advanced analytical techniques (electron beam analysis). The combined irradiation process of ultrasonic and microwave energy is observed to be the most effective for the beneficiation of high-sulfur coal than the single process. The result showed a maximum of 51.28% and 66.34% ash (mineral matter) removal from the coal samples by microwave followed by an ultrasonic process. The X-ray photoelectron spectroscopy (XPS) analysis revealed that both inorganic and organic sulfur is present in these Cenozoic low-rank, high-sulfur Indian coals. The high resolution-transmission electron microscopy (HR-TEM) image analysis of the treated coal samples showed nearly agglomerated collections of nanomaterials; carbon spheres/flacks with an irregular shape; and the elements such as oxygen, iron, silicon, sulfur, and aluminum in the beneficiated coal samples. The major mineral phases, including quartz, kaolinite, and gypsum, are found to be removed during the beneficiation process. The thermal analysis (TGA-DTG) also showed the suitability of the beneficiated coals for the power plant application.
Collections