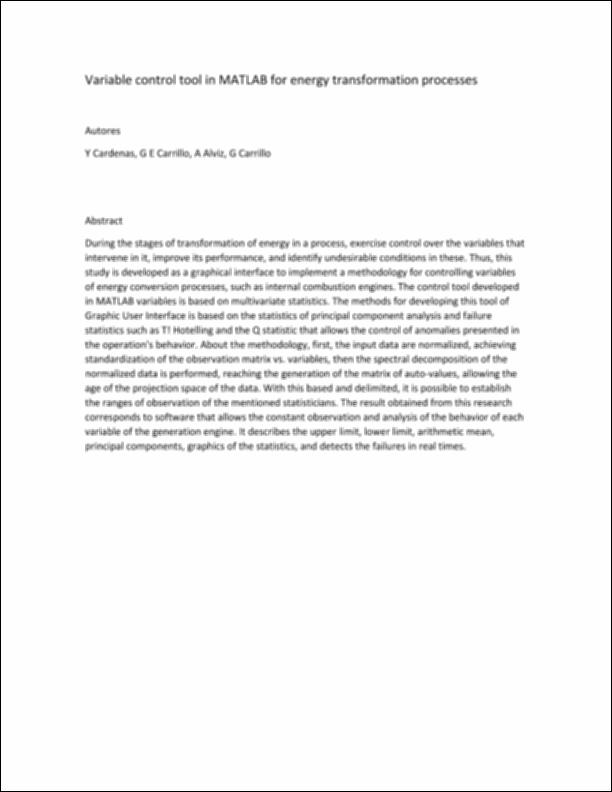 During the stages of transformation of energy in a process, exercise control over the variables that intervene in it, improve its performance, and identify undesirable conditions in these. Thus, this study is developed as a graphical interface to implement a methodology for controlling variables of energy conversion processes, such as internal combustion engines. The control tool developed in MATLAB variables is based on multivariate statistics. The methods for developing this tool of Graphic User Interface is based on the statistics of principal component analysis and failure statistics such as T! Hotelling and the Q statistic that allows the control of anomalies presented in the operation's behavior. About the methodology, first, the input data are normalized, achieving standardization of the observation matrix vs. variables, then the spectral decomposition of the normalized data is performed, reaching the generation of the matrix of auto-values, allowing the age of the projection space of the data. With this based and delimited, it is possible to establish the ranges of observation of the mentioned statisticians. The result obtained from this research corresponds to software that allows the constant observation and analysis of the behavior of each variable of the generation engine. It describes the upper limit, lower limit, arithmetic mean, principal components, graphics of the statistics, and detects the failures in real times.
Collections