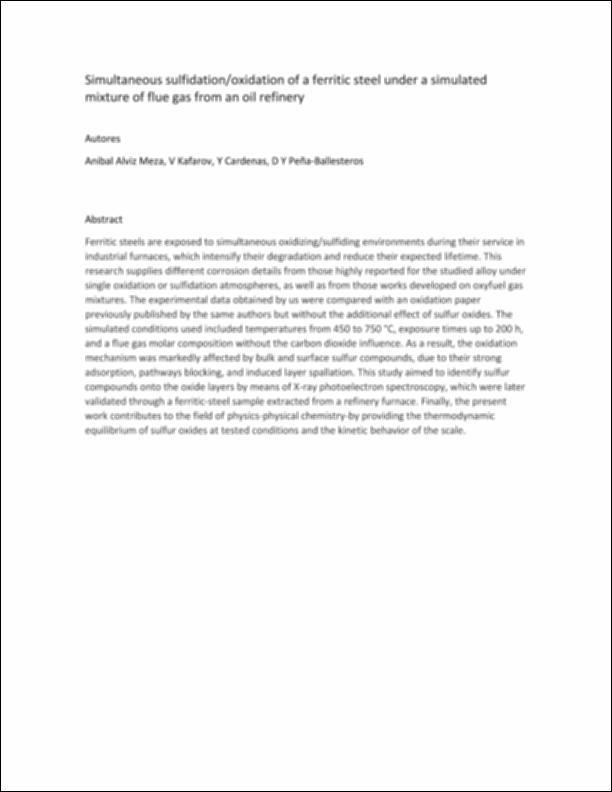 Simultaneous sulfidation oxidation of a ferritic steel under a simulated mixture of flue gas from an oil refinery.pdf (96Kb)
Author

Ferritic steels are exposed to simultaneous oxidizing/sulfiding environments during their service in industrial furnaces, which intensify their degradation and reduce their expected lifetime. This research supplies different corrosion details from those highly reported for the studied alloy under single oxidation or sulfidation atmospheres, as well as from those works developed on oxyfuel gas mixtures. The experimental data obtained by us were compared with an oxidation paper previously published by the same authors but without the additional effect of sulfur oxides. The simulated conditions used included temperatures from 450 to 750 °C, exposure times up to 200 h, and a flue gas molar composition without the carbon dioxide influence. As a result, the oxidation mechanism was markedly affected by bulk and surface sulfur compounds, due to their strong adsorption, pathways blocking, and induced layer spallation. This study aimed to identify sulfur compounds onto the oxide layers by means of X-ray photoelectron spectroscopy, which were later validated through a ferritic-steel sample extracted from a refinery furnace. Finally, the present work contributes to the field of physics-physical chemistry-by providing the thermodynamic equilibrium of sulfur oxides at tested conditions and the kinetic behavior of the scale.
Collections