Is Colombia an example of successful containment of the 2020 COVID-19 pandemic? A critical analysis of the epidemiological data, March to July 2020 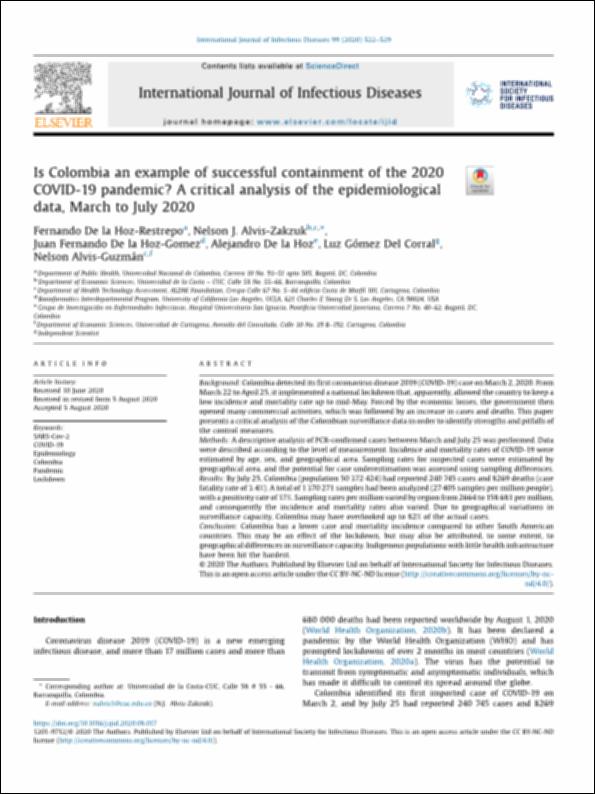 Is Colombia an example of successful containment of the 2020COVID-19 pandemic A critical analysis of the epidemiologicaldata, March to July 2020.pdf (1.140Mb)
Author

Background: Colombia detected its first coronavirus disease 2019 (COVID-19) case on March 2, 2020. From March 22 to April 25, it implemented a national lockdown that, apparently, allowed the country to keep a low incidence and mortality rate up to mid-May. Forced by the economic losses, the government then opened many commercial activities, which was followed by an increase in cases and deaths. This paper presents a critical analysis of the Colombian surveillance data in order to identify strengths and pitfalls of the control measures. Methods: A descriptive analysis of PCR-confirmed cases between March and July 25 was performed. Data were described according to the level of measurement. Incidence and mortality rates of COVID-19 were estimated by age, sex, and geographical area. Sampling rates for suspected cases were estimated by geographical area, and the potential for case underestimation was assessed using sampling differences. Results: By July 25, Colombia (population 50 372 424) had reported 240 745 cases and 8269 deaths (case fatality rate of 3.4%). A total of 1 370 271 samples had been analyzed (27405 samples per million people), with a positivity rate of 17%. Sampling rates per million varied by region from 2664 to 158 681 per million, and consequently the incidence and mortality rates also varied. Due to geographical variations in surveillance capacity, Colombia may have overlooked up to 82% of the actual cases. Conclusion: Colombia has a lower case and mortality incidence compared to other South American countries. This may be an effect of the lockdown, but may also be attributed, to some extent, to geographical differences in surveillance capacity. Indigenous populations with little health infrastructure have been hit the hardest.
Collections