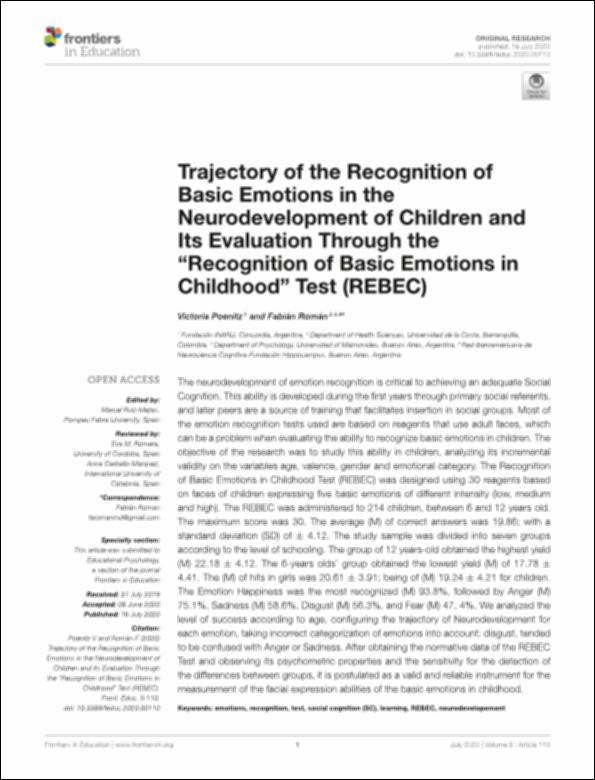 The neurodevelopment of emotion recognition is critical to achieving an adequate Social Cognition. This ability is developed during the first years through primary social referents, and later peers are a source of training that facilitates insertion in social groups. Most of the emotion recognition tests used are based on reagents that use adult faces, which can be a problem when evaluating the ability to recognize basic emotions in children. The objective of the research was to study this ability in children, analyzing its incremental validity on the variables age, valence, gender and emotional category. The Recognition of Basic Emotions in Childhood Test (REBEC) was designed using 30 reagents based on faces of children expressing five basic emotions of different intensity (low, medium and high). The REBEC was administered to 214 children, between 6 and 12 years old. The maximum score was 30. The average (M) of correct answers was 19.86; with a standard deviation (SD) of ± 4.12. The study sample was divided into seven groups according to the level of schooling. The group of 12 years-old obtained the highest yield (M) 22.18 ± 4.12. The 6-years olds’ group obtained the lowest yield (M) of 17.78 ± 4.41. The (M) of hits in girls was 20.61 ± 3.91; being of (M) 19.24 ± 4.21 for children. The Emotion Happiness was the most recognized (M) 93.8%, followed by Anger (M) 75.1%, Sadness (M) 58.6%, Disgust (M) 56.3%, and Fear (M) 47, 4%, We analyzed the level of success according to age, configuring the trajectory of Neurodevelopment for each emotion, taking incorrect categorization of emotions into account: disgust, tended to be confused with Anger or Sadness. After obtaining the normative data of the REBEC Test and observing its psychometric properties and the sensitivity for the detection of the differences between groups, it is postulated as a valid and reliable instrument for the measurement of the facial expression abilities of the basic emotions in childhood.
Collections