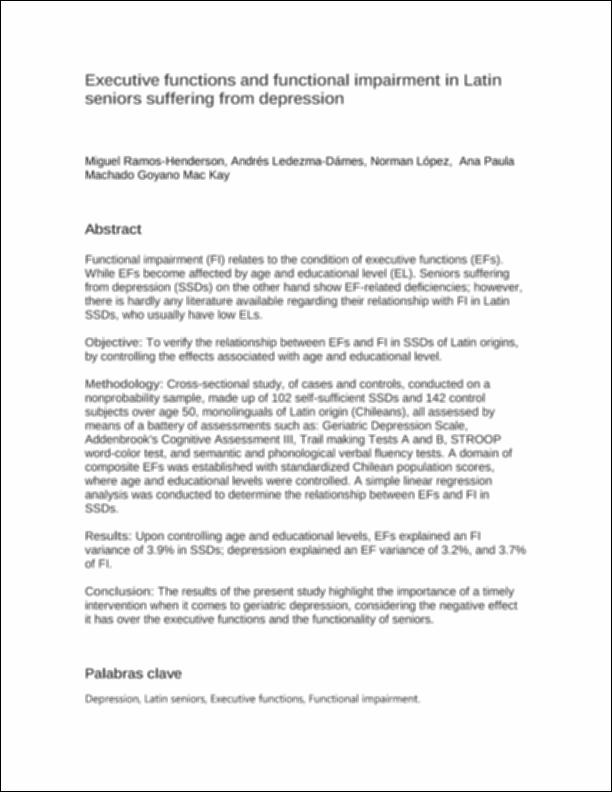 Functional impairment (FI) relates to the condition of executive functions (EFs). While EFs become affected by age and educational level (EL). Seniors suffering from depression (SSDs) on the other hand show EF-related deficiencies; however, there is hardly any literature available regarding their relationship with FI in Latin SSDs, who usually have low ELs. Objective: To verify the relationship between EFs and FI in SSDs of Latin origins, by controlling the effects associated with age and educational level. Methodology: Cross-sectional study, of cases and controls, conducted on a nonprobability sample, made up of 102 self-sufficient SSDs and 142 control subjects over age 50, monolinguals of Latin origin (Chileans), all assessed by means of a battery of assessments such as: Geriatric Depression Scale, Addenbrook's Cognitive Assessment III, Trail making Tests A and B, STROOP word-color test, and semantic and phonological verbal fluency tests. A domain of composite EFs was established with standardized Chilean population scores, where age and educational levels were controlled. A simple linear regression analysis was conducted to determine the relationship between EFs and FI in SSDs. Results: Upon controlling age and educational levels, EFs explained an FI variance of 3.9% in SSDs; depression explained an EF variance of 3.2%, and 3.7% of FI. Conclusion: The results of the present study highlight the importance of a timely intervention when it comes to geriatric depression, considering the negative effect it has over the executive functions and the functionality of seniors.
Collections