Diagnostic accuracy of the UDS 3.0 neuropsychological battery in a cohort with Alzheimer’s disease in Colombia 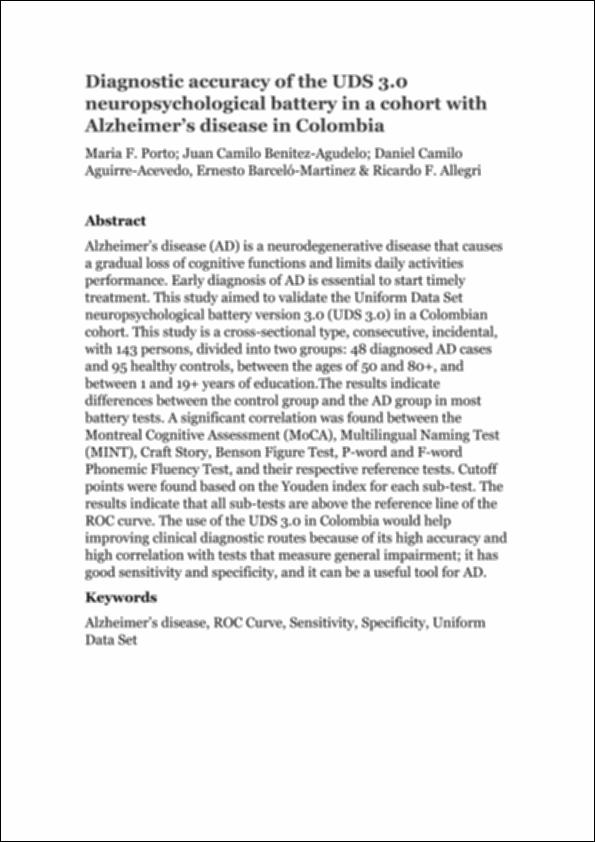 Diagnostic accuracy of the UDS 3.0 neuropsychological battery in a cohort with Alzheimer’s disease in Colombia.pdf (300.0Kb)
Author

Alzheimer’s disease (AD) is a neurodegenerative disease that causes a gradual loss of cognitive functions and limits daily activities performance. Early diagnosis of AD is essential to start timely treatment. This study aimed to validate the Uniform Data Set neuropsychological battery version 3.0 (UDS 3.0) in a Colombian cohort. This study is a cross-sectional type, consecutive, incidental, with 143 persons, divided into two groups: 48 diagnosed AD cases and 95 healthy controls, between the ages of 50 and 80+, and between 1 and 19+ years of education.The results indicate differences between the control group and the AD group in most battery tests. A significant correlation was found between the Montreal Cognitive Assessment (MoCA), Multilingual Naming Test (MINT), Craft Story, Benson Figure Test, P-word and F-word Phonemic Fluency Test, and their respective reference tests. Cutoff points were found based on the Youden index for each sub-test. The results indicate that all sub-tests are above the reference line of the ROC curve. The use of the UDS 3.0 in Colombia would help improving clinical diagnostic routes because of its high accuracy and high correlation with tests that measure general impairment; it has good sensitivity and specificity, and it can be a useful tool for AD.
Collections