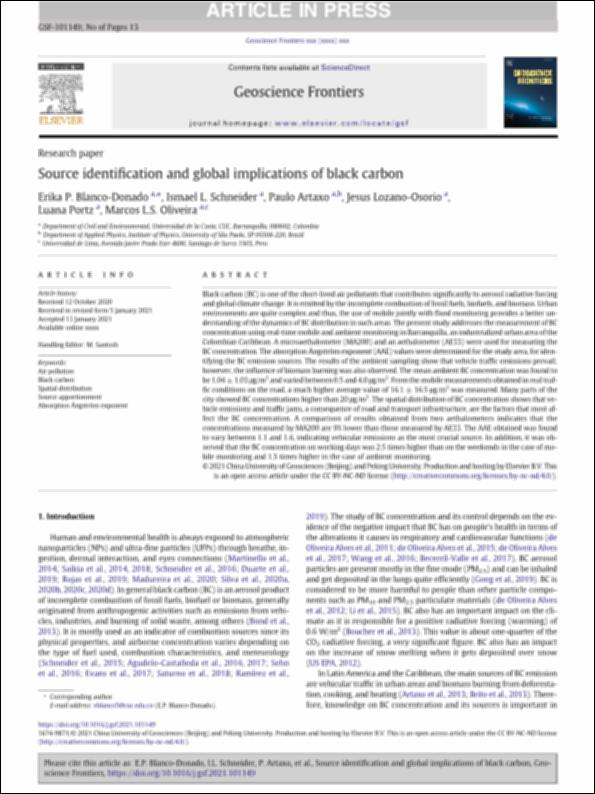 Black carbon (BC) is one of the short-lived air pollutants that contributes significantly to aerosol radiative forcing and global climate change. It is emitted by the incomplete combustion of fossil fuels, biofuels, and biomass. Urban environments are quite complex and thus, the use of mobile jointly with fixed monitoring provides a better understanding of the dynamics of BC distribution in such areas. The present study addresses the measurement of BC concentration using real-time mobile and ambient monitoring in Barranquilla, an industrialized urban area of the Colombian Caribbean. A microaethalometer (MA200) and an aethalometer (AE33) were used for measuring the BC concentration. The absorption Ångström exponent (AAE) values were determined for the study area, for identifying the BC emission sources. The results of the ambient sampling show that vehicle traffic emissions prevail; however, the influence of biomass burning was also observed. The mean ambient BC concentration was found to be 1.04 ± 1.03 μg/m3 and varied between 0.5 and 4.0 μg/m3. From the mobile measurements obtained in real traffic conditions on the road, a much higher average value of 16.1 ± 16.5 μg/m3 was measured. Many parts of the city showed BC concentrations higher than 20 μg/m3. The spatial distribution of BC concentration shows that vehicle emissions and traffic jams, a consequence of road and transport infrastructure, are the factors that most affect the BC concentration. A comparison of results obtained from two aethalometers indicates that the concentrations measured by MA200 are 9% lower than those measured by AE33. The AAE obtained was found to vary between 1.1 and 1.6, indicating vehicular emissions as the most crucial source. In addition, it was observed that the BC concentration on working days was 2.5 times higher than on the weekends in the case of mobile monitoring and 1.5 times higher in the case of ambient monitoring.
Collections