Trophic Relationships among Five Species of Anura in the Colombian Caribbean Tropical Dry Forest: A Spatial and Temporal Approach 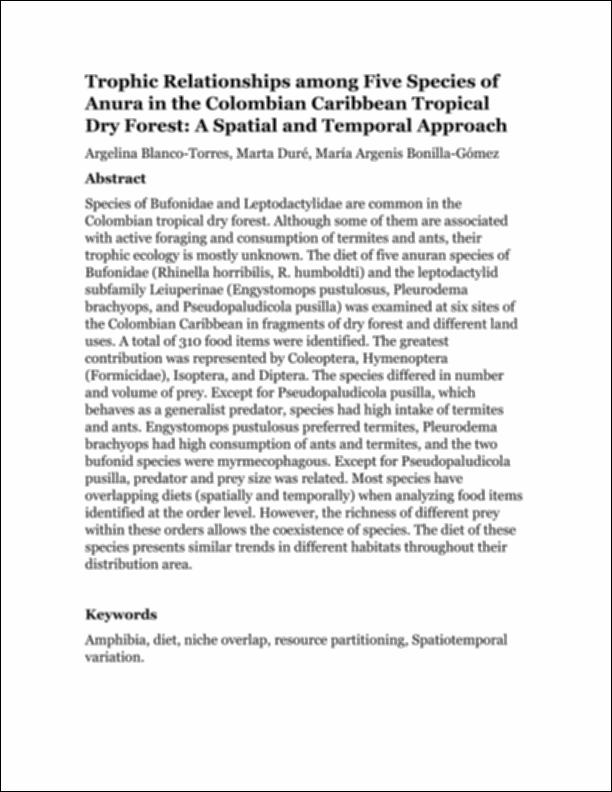 Species of Bufonidae and Leptodactylidae are common in the Colombian tropical dry forest. Although some of them are associated with active foraging and consumption of termites and ants, their trophic ecology is mostly unknown. The diet of five anuran species of Bufonidae (Rhinella horribilis, R. humboldti) and the leptodactylid subfamily Leiuperinae (Engystomops pustulosus, Pleurodema brachyops, and Pseudopaludicola pusilla) was examined at six sites of the Colombian Caribbean in fragments of dry forest and different land uses. A total of 310 food items were identified. The greatest contribution was represented by Coleoptera, Hymenoptera (Formicidae), Isoptera, and Diptera. The species differed in number and volume of prey. Except for Pseudopaludicola pusilla, which behaves as a generalist predator, species had high intake of termites and ants. Engystomops pustulosus preferred termites, Pleurodema brachyops had high consumption of ants and termites, and the two bufonid species were myrmecophagous. Except for Pseudopaludicola pusilla, predator and prey size was related. Most species have overlapping diets (spatially and temporally) when analyzing food items identified at the order level. However, the richness of different prey within these orders allows the coexistence of species. The diet of these species presents similar trends in different habitats throughout their distribution area.
Collections