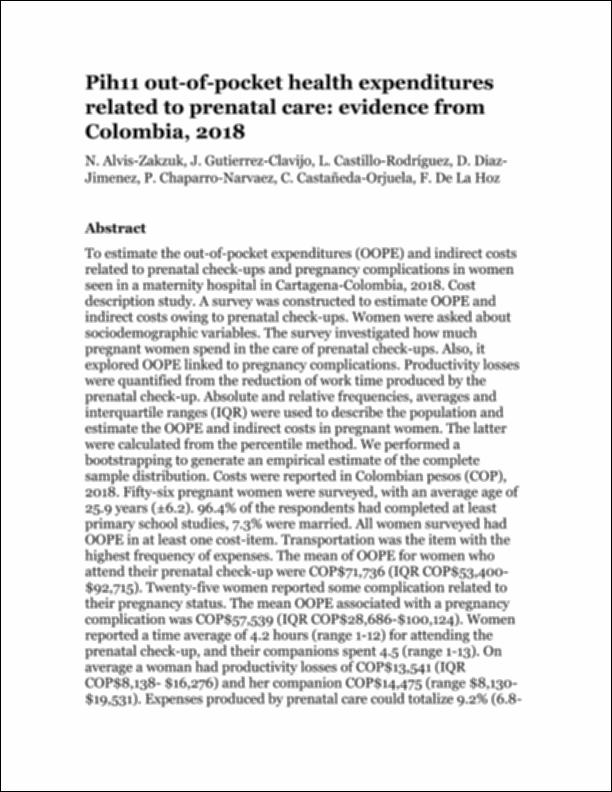 To estimate the out-of-pocket expenditures (OOPE) and indirect costs related to prenatal check-ups and pregnancy complications in women seen in a maternity hospital in Cartagena-Colombia, 2018. Cost description study. A survey was constructed to estimate OOPE and indirect costs owing to prenatal check-ups. Women were asked about sociodemographic variables. The survey investigated how much pregnant women spend in the care of prenatal check-ups. Also, it explored OOPE linked to pregnancy complications. Productivity losses were quantified from the reduction of work time produced by the prenatal check-up. Absolute and relative frequencies, averages and interquartile ranges (IQR) were used to describe the population and estimate the OOPE and indirect costs in pregnant women. The latter were calculated from the percentile method. We performed a bootstrapping to generate an empirical estimate of the complete sample distribution. Costs were reported in Colombian pesos (COP), 2018. Fifty-six pregnant women were surveyed, with an average age of 25.9 years (±6.2). 96.4% of the respondents had completed at least primary school studies, 7.3% were married. All women surveyed had OOPE in at least one cost-item. Transportation was the item with the highest frequency of expenses. The mean of OOPE for women who attend their prenatal check-up were COP$71,736 (IQR COP$53,400-$92,715). Twenty-five women reported some complication related to their pregnancy status. The mean OOPE associated with a pregnancy complication was COP$57,539 (IQR COP$28,686-$100,124). Women reported a time average of 4.2 hours (range 1-12) for attending the prenatal check-up, and their companions spent 4.5 (range 1-13). On average a woman had productivity losses of COP$13,541 (IQR COP$8,138- $16,276) and her companion COP$14,475 (range $8,130-$19,531). Expenses produced by prenatal care could totalize 9.2% (6.8-11.9) of the monthly income of a poor household, which unfortunately makes prenatal care an important source of economic burden, impacting poor population in Cartagena.
Collections