The role of experience, perceived match importance, and anxiety on cortisol response in an official esports competition 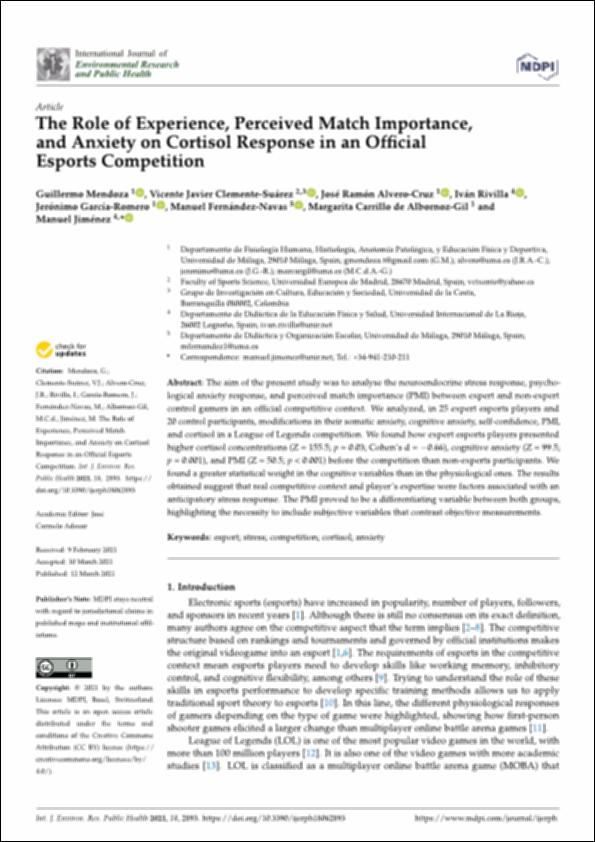 The role of experience, perceived match importance, and anxiety on cortisol response in an official esports competition.pdf (885.1Kb)
Author

The aim of the present study was to analyse the neuroendocrine stress response, psychological anxiety response, and perceived match importance (PMI) between expert and non-expert control gamers in an official competitive context. We analyzed, in 25 expert esports players and 20 control participants, modifications in their somatic anxiety, cognitive anxiety, self-confidence, PMI, and cortisol in a League of Legends competition. We found how expert esports players presented higher cortisol concentrations (Z = 155.5; p = 0.03; Cohen’s d = −0.66), cognitive anxiety (Z = 99.5; p = 0.001), and PMI (Z = 50.5; p < 0.001) before the competition than non-experts participants. We found a greater statistical weight in the cognitive variables than in the physiological ones. The results obtained suggest that real competitive context and player’s expertise were factors associated with an anticipatory stress response. The PMI proved to be a differentiating variable between both groups, highlighting the necessity to include subjective variables that contrast objective measurements.
Collections