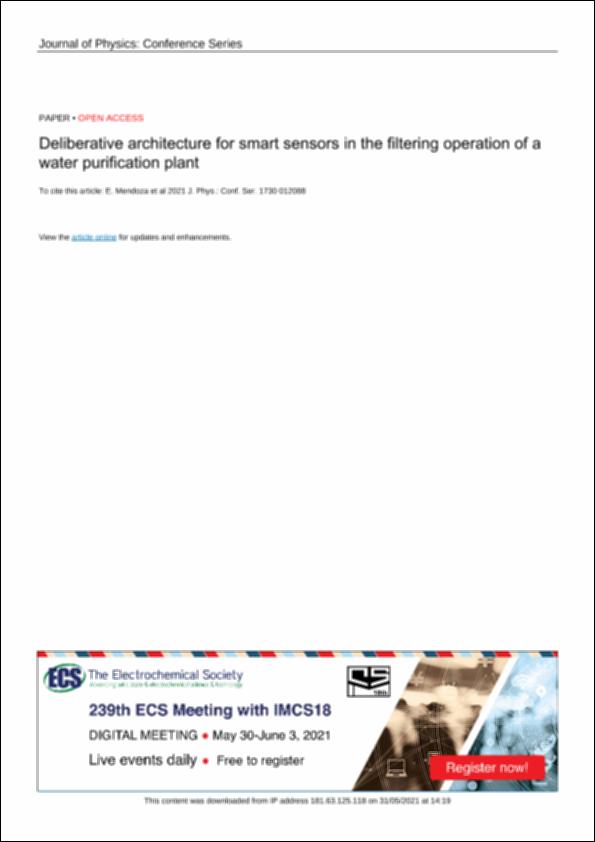 The increase of applications for industrial smart sensors is booming, mainly due to the use of distributed automation architectures, industrial evolution and recent technological advances, which guide the industry to a greater degree of automation, integration and globalization. In this research work, an architecture for deliberative-type intelligent industrial sensors is proposed, based on the BDI (Belief Desire Intentions) model, adaptable to the measurement of different variables of the filtering process of a water purification plant. An intelligent sensor with functions of signal digitalization, self-calibration, alarm generation, communication with PLC, user interface for parameter adjustment, and analysis with data extrapolation have been arranged. For decision making, the use of fuzzy logic techniques has been considered, which allows imprecise parameters to be appropriately represented, simplifying decision problem solving in the industrial environment, generating stable and fast systems with low processing requirements. The proposed architecture has been modelled, simulated and validated using UML language in conjunction with Petri nets, which facilitate the representation of discrete system events, presenting them clearly and precisely. In the implementation and testing of the prototype, C/C ++ language has been used in an 8-bit microcontroller, experimentally corroborating the operation of the device, which allowed evaluating the behavior of a pseudo-intelligent agent based on the requirements of the water treatment plant, and also through comparisons with similar works developed by other researchers.
Collections