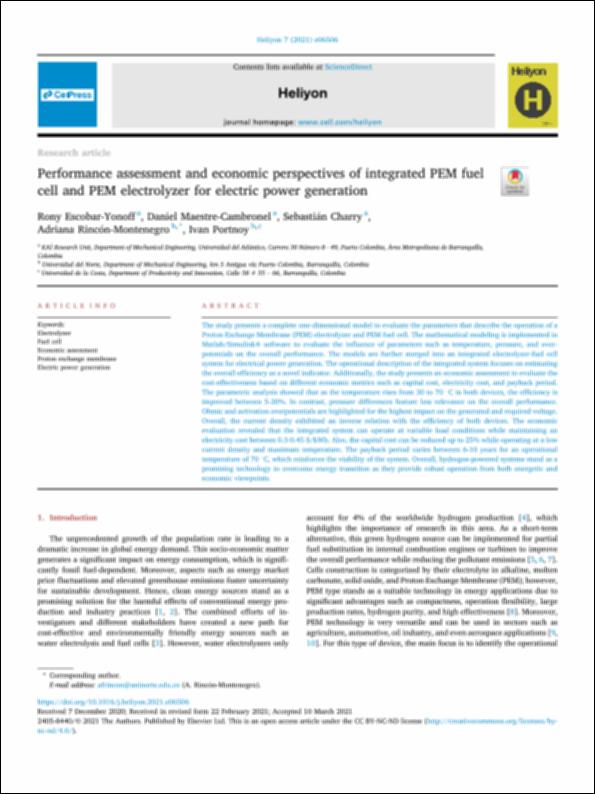 The study presents a complete one-dimensional model to evaluate the parameters that describe the operation of a Proton Exchange Membrane (PEM) electrolyzer and PEM fuel cell. The mathematical modeling is implemented in Matlab/Simulink® software to evaluate the influence of parameters such as temperature, pressure, and overpotentials on the overall performance. The models are further merged into an integrated electrolyzer-fuel cell system for electrical power generation. The operational description of the integrated system focuses on estimating the overall efficiency as a novel indicator. Additionally, the study presents an economic assessment to evaluate the cost-effectiveness based on different economic metrics such as capital cost, electricity cost, and payback period. The parametric analysis showed that as the temperature rises from 30 to 70 °C in both devices, the efficiency is improved between 5-20%. In contrast, pressure differences feature less relevance on the overall performance. Ohmic and activation overpotentials are highlighted for the highest impact on the generated and required voltage. Overall, the current density exhibited an inverse relation with the efficiency of both devices. The economic evaluation revealed that the integrated system can operate at variable load conditions while maintaining an electricity cost between 0.3-0.45 $/kWh. Also, the capital cost can be reduced up to 25% while operating at a low current density and maximum temperature. The payback period varies between 6-10 years for an operational temperature of 70 °C, which reinforces the viability of the system. Overall, hydrogen-powered systems stand as a promising technology to overcome energy transition as they provide robust operation from both energetic and economic viewpoints.
Collections