Degradation of a transgressive coastal Dunefield by pines plantation and strategies for recuperation (Lagoa Do Peixe National Park, Southern Brazil) 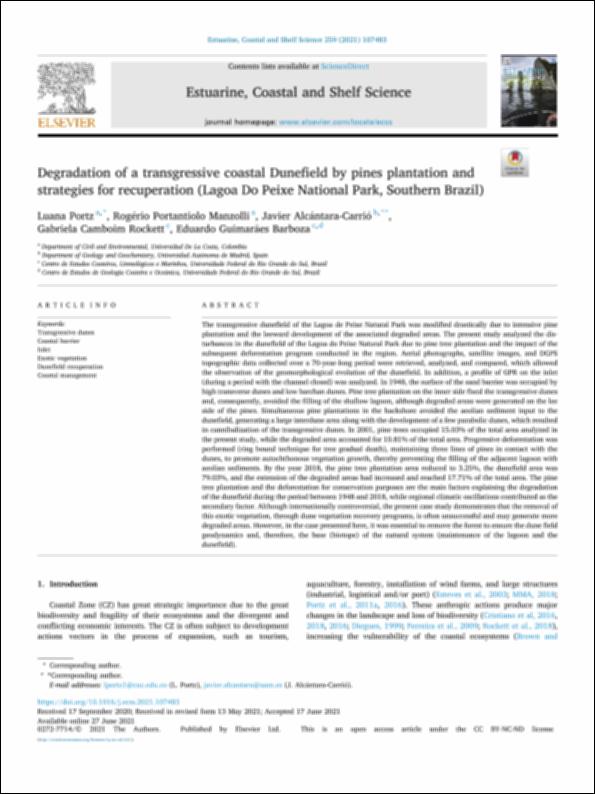 The transgressive dunefield of the Lagoa de Peixe Natural Park was modified drastically due to intensive pine plantation and the leeward development of the associated degraded areas. The present study analyzed the disturbances in the dunefield of the Lagoa do Peixe Natural Park due to pine tree plantation and the impact of the subsequent deforestation program conducted in the region. Aerial photographs, satellite images, and DGPS topographic data collected over a 70-year-long period were retrieved, analyzed, and compared, which allowed the observation of the geomorphological evolution of the dunefield. In addition, a profile of GPR on the inlet (during a period with the channel closed) was analyzed. In 1948, the surface of the sand barrier was occupied by high transverse dunes and low barchan dunes. Pine tree plantation on the inner side fixed the transgressive dunes and, consequently, avoided the filling of the shallow lagoon, although degraded areas were generated on the lee side of the pines. Simultaneous pine plantations in the backshore avoided the aeolian sediment input to the dunefield, generating a large interdune area along with the development of a few parabolic dunes, which resulted in cannibalization of the transgressive dunes. In 2001, pine trees occupied 15.03% of the total area analyzed in the present study, while the degraded area accounted for 10.81% of the total area. Progressive deforestation was performed (ring bound technique for tree gradual death), maintaining three lines of pines in contact with the dunes, to promote autochthonous vegetation growth, thereby preventing the filling of the adjacent lagoon with aeolian sediments. By the year 2018, the pine tree plantation area reduced to 3.25%, the dunefield area was 79.03%, and the extension of the degraded areas had increased and reached 17.71% of the total area. The pine tree plantation and the deforestation for conservation purposes are the main factors explaining the degradation of the dunefield during the period between 1948 and 2018, while regional climatic oscillations contributed as the secondary factor. Although internationally controversial, the present case study demonstrates that the removal of this exotic vegetation, through dune vegetation recovery programs, is often unsuccessful and may generate more degraded areas. However, in the case presented here, it was essential to remove the forest to ensure the dune field geodynamics and, therefore, the base (biotope) of the natural system (maintenance of the lagoon and the dunefield).
Collections